Erinys is the secondary antagonist in God of War: Ghost of Sparta. She is the daughter of Thanatos, and aid her father to kill both Kratos and Deimos.

She was voiced by Jennifer Hale and Erin Torpey.

Erinys is basically a female version of her father. In her humanoid form she has raven-like wings and long claws on her hands. She wears a hood and a worn out skirt that reveals the sides of hips. Despite this fact, her appearance can be considered mighty and beautiful. Tall and with a slim physique, she posses two large breasts which she leaves completely exposed. With the exception of her lips and nipples, her entire skin is pale gray, probably for her association with the Death. Her eyes and hair are dark coloured. Erinys also has a second form where she resembles a giant raven-live monster with armor plating.

After the destruction of Atlantis, Thanatos sent Erinys to search for Kratos, and kill him. She does this by killing Kratos' Spartan brothers and uses this as a warning to cease his bloody quest. However, Erinys let one live long enough to warn Kratos that he will never find the skull to enter the Domain of Death. Kratos' search had led him to the Aroania Pass in the Mounts of Aroania, where he encountered Erinys killing another Spartan across the bridge. Erinys spots Kratos and calls him the God Slayer, flew to Kratos and began to battle him.

Erinys first fights Kratos in her humanoid form, until she had both her wings cut off. However, she quickly grew a new pair of wings and healed most of her wounds, then flew away in to the distance and returned as a monstrous giant bird with thick armor. In seconds, she quickly destroyed the bridge and left Kratos no choice but to slide down the broken debris and land on her back as she flew to the sky.

In Her Beast Form

While in the air, Erinys released Kratos and she flies down leaving him to fall after her. After landing on her back again Kratos stabbed the beast on the back of the neck with his blades engulfed with Thera's Bane, which is the armor's only weakness.

Being mortally wounded, Erinys crashed into a forest below, leaving her in a vulnerable state. Because of this Erinys reverted back to her humanoid form, giving Kratos the chance to finish her off. As Kratos' opportunity came, she made a final attempt to kill him, which had ended by having both her wings and left arm cut off. Helding her by the head, Kratos powered his blade while the goddess desperately tried to free herself. He finally stabbed her through the chest from behind, killing her almost istantly. With this, the goddess Erinys, daughter of the Death, ceased to exist once and for all. Kratos then grabbed the Scourge of Erinys from her severed arm and made his way towards Sparta.

Her destruction brought sorrow to her father Thanatos, who tried to avenge her death murdering Kratos' brother.

Being Thanatos' daughter, Erinys is a deity and as such possesses superhuman levels of strength, speed, endurance, and so forth. She has large wings which gives her flight abilities and has sharp claws. She also has the ability to regenerate, as she was able to regrow her wings after Kratos manage to rip them off. She can also create several voids to attack Kratos or can even summon a number of large birds. 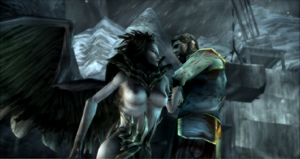 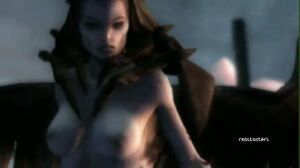 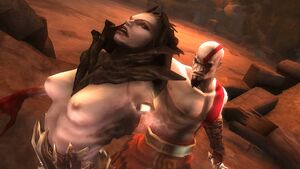 Final moments of the goddess Erinys.
Add a photo to this gallery

Retrieved from "https://villains.fandom.com/wiki/Erinys?oldid=3823220"
Community content is available under CC-BY-SA unless otherwise noted.