Sinbad: Legend of the Seven Seas

Greek goddess of chaos and strife

Create chaos and disorder in the entire world (possibly failed).

She was voiced by Michelle Pfeiffer, who also played Catwoman in Batman Returns, Velma Von Tussle in Hairspray, Lamia in Stardust, and Queen Ingrith in Maleficent: Mistress of Evil.

Eris is the archaic Greek goddess of chaos, and as such, she tries her best to make the world chaotic. She controls a savage army of huge monsters, including Cetus, Scorpio, Musca, Leo, Lacerta, and the Roc. Since she is a goddess, Eris has almost omnipotent-level powers (though by no means without limits).

Eris is first seen watching Prince Proteus sailing towards Syracuse with the Book of Peace aboard his ship, with the thief Sinbad, who has seen her image on the walls of her temples before during his travels, in hot pursuit.

Finding the chase fun for her purpose in glorious chaos, she sends Cetus to attack the ship, so that she can acquire the Book. However, Proteus and Sinbad work together to defeat the beast. However, Cetus drags Sinbad into the depths of the sea where he meets Eris, who quietly breathes a huge underwater bubble to allow him to breathe. Eris promises to give Sinbad anything he wants in exchange for stealing the Book of Peace for her, which he agrees to.

Sinbad and his crew travel to Syracuse to take the Book but he discards the idea after meeting Proteus' fiancée, Marina. However, Eris later disguises herself as Sinbad and knocks out a guard before stealing the book herself. Syracuse is immediately plunges into darkness and Sinbad is arrested. When he states that he does not have the Book, he is sentenced to death until Proteus interferes, having believed Sinbad's earlier claim of Eris framing him. Sinbad is sent to steal the Book back from her and return it to Syracuse in ten days' time, or else Proteus will be executed in Sinbad's place.

Though initially reluctant, Sinbad agrees to confront Eris after Marina sneaks on board his ship and convinces him to save his friend. Meanwhile, Eris watches over him and sends many minions to intercept him, such as sirens and the Roc, but Sinbad manages to evade these threats with Marina's aid. Eventually, Sinbad and Marina enter Eris' realm of chaos where Eris reveals her plan to them. She had known that Proteus would take Sinbad's place and that Sinbad, being a selfish thief, would sail away to paradise once he was free and leave his friend to die; this would then leave Syracuse without the next rightful king and gradually crumble into chaos. Eris hadn't counted on Marina convincing Sinbad to actually confront her, but she again plays on his supposedly manipulative and selfish nature by asking him a question and promising to give him the Book of Peace if he answers it truthfully. The question is whether Sinbad would actually go back to Syracuse to die instead of Proteus if he did not obtain the Book, to which he says yes. Sensing he is lying, Eris sends Sinbad and Marina out of her realm with an evil laugh, keeping the Book of Peace for herself.

Knowing that he tried his best, Sinbad has a change of heart and decides to sail back to Syracuse to be executed. As the sword is about to fall, it shatters into hundreds of fragments and an enlarged and livid Eris appears before him. Sinbad realizes that he has now told the truth, and thus he has fulfilled his side of the deal with Eris. At first, Eris is about to retaliate in anger, but she eventually hands over the Book of Peace over to him as promised. Despite having been outwitted by a mere human thief, Eris quickly shrugs off her anger and tells Sinbad that she is off to create more chaos elsewhere, bidding farewell before vanishing in a puff of purple smoke.

Eris represents true malevolence and deviance. She is seen as devious, spiteful, vindictive, blasphemous and passionate when it comes to the prospect of the world potentially crumbling into chaos; which she refers to as being a glorious event. She is also shown to have a particular interest in the protagonist character of her film: Sinbad since at first, he is a black-hearted, mysterious and selfish thief who is determined on getting his way at the expense of everything else. However, all that changes with the events she has set in place in the film and she is seen enraged at the fact that she has gotten her way which shows her to not be one who likes fair and square events. Eris also claims Sinbad is "cute but not that cute" when he gets cocky upon her defeat. She is also shown to be wicked, ruthless, intelligent and manipulative, deliberately posing as Sinbad while stealing of the Book of Peace knowing that his former best friend (and future prince of Syracuse) Proteus would take his place in a planned execution. She is also shown to take a dullness tone to happy endings. 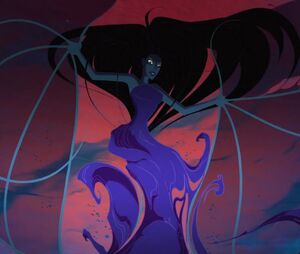 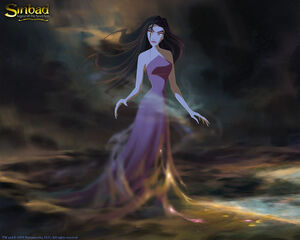 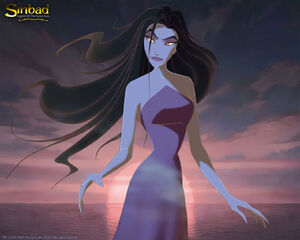 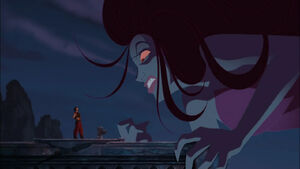 Eris' breakdown.
Add a photo to this gallery

Retrieved from "https://villains.fandom.com/wiki/Eris_(Sinbad)?oldid=3496520"
Community content is available under CC-BY-SA unless otherwise noted.