Goddess of Chaos and Discord

Greek Goddess of Chaos and Discord

Bring all the chaos around the world.

She was voiced by Rachael MacFarlane who also voices Mindy

She is a goddess whose goal is to create destruction, suffering, and general mayhem. The source of her powers is the "Apple of Discord", a golden apple that can be changed into any form for any purpose she wishes. However, she ostensibly has the personality of a spoiled modern teenage girl. In one episode, she has a romance with Hoss Delgado when she comes to Billy's house when the principal of his school comes over for dinner with the intention of ruining the meeting, and Hoss in turn comes to stop her. Despite their mutual attraction, Hoss threatens to destroy Eris while Eris says she will banish Hoss to the "Puppet Dimension" if he tries anything. Eventually, Eris summons giant alien zombie lobsters that destroy Billy's house and infuriate the principal, and she and Hoss make out onscreen, while Grim complains that this is inappropriate for a kids' show. In the credits sequence, it is shown that Hoss was sent to the Puppet Dimension.

Originally, if Underfist became a series, Eris would split herself into two different forms, Nice Eris & Naughty Eris (as a result of her heartbreak from the breakup with Hoss Delgado). Nice Eris would be portrayed as the "Perfect Girlfriend" who acts like a stalker towards Hoss and to "smother him with love" while Naughty Eris is portrayed as a "Bad Girl" who loves to cause chaos and creating havoc (like the original Eris) and tries to convince Hoss to join her in her chaotic mischief as well as challenging Underfist with her chaotic intentions. 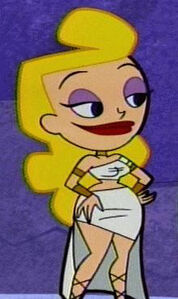 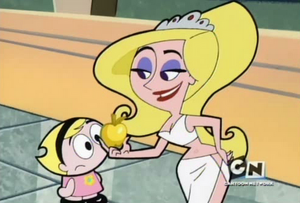 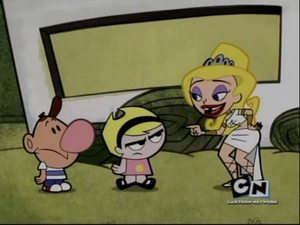 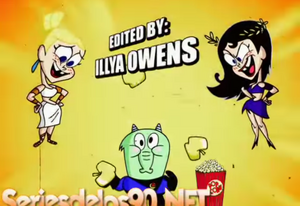 Nice Eris and Naughty Eris from the end credits of Underfist: Halloween Bash 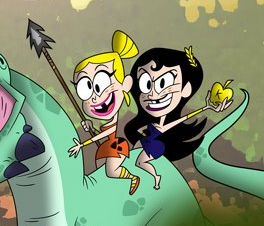 Nice Eris and Naughty Eris riding on a dinosaur 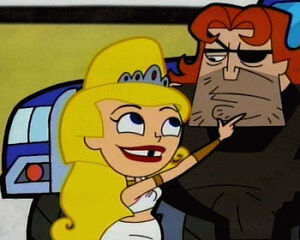 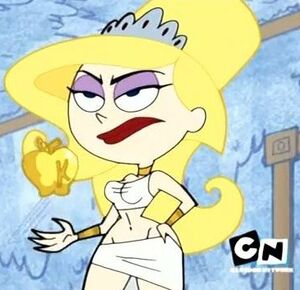 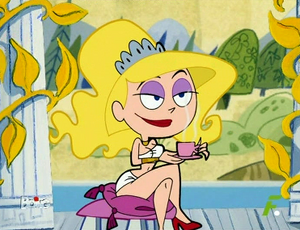 Retrieved from "https://villains.fandom.com/wiki/Eris_(The_Grim_Adventures_of_Billy_%26_Mandy)?oldid=4020703"
Community content is available under CC-BY-SA unless otherwise noted.