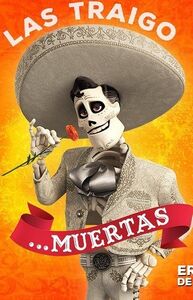 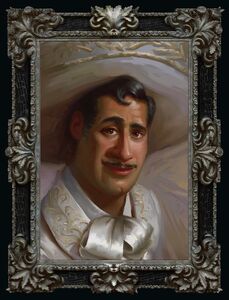 A painting of Ernesto de la Cruz at his own tomb. 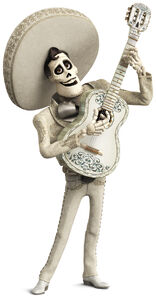 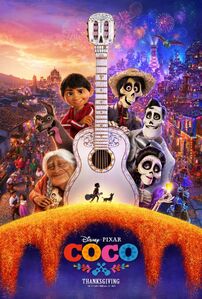 Ernesto, on the film's theatrical poster.
Add a photo to this gallery

Ernesto is surprised of Héctor quitting his music career.

Ernesto tries to convince Héctor to stay with him to no avail.

Ernesto pretending to support Héctor's decision of going back to his family.

Ernesto winks at the camera, in one of his films.

Ernesto singing his final song before his death.

Ernesto crushed by a bell

"I have a great-great-grandson!"

"Ooh-hoo! Ooh! The fireworks have begun!"

Ernesto getting attacked by Héctor, who discovers the truth behind his death.

Ernesto watches as his security take Héctor to the pit.

"You have to be willing to do whatever it takes to..."

"I know you understand."

Ernesto getting slapped in the face by Imelda for murdering Héctor.

Ernesto is shocked to see that Héctor has escaped the pit.

Ernesto gets hit by Imelda a second time, for trying to murder Miguel.

"You!"- Ernesto is furious to see that Miguel has escaped the pit.

"You're related to Héctor?"

Ernesto is confronted by Miguel & the deceased Riveras to retrieve Héctor's photo.

Ernesto calling the guards to stop the Riveras.

Ernesto pushing away a staff member in his desperate attempt to escape from the Riveras.

"Get her off the stage!"
Ernesto ordering his security to get Imelda off the stage and to retrieve Héctor's photo.

Ernesto watching as the security guards enter the stage to steal Héctor's photo from Imelda...

...but suddenly being furious to see Imelda stealing the spotlight as she sings "La Llorona" to the audience.

Ernesto smirking as he grabs Imelda's hand to prevent her from leaving the stage.

Ernesto getting his foot stomped by Imelda at the end of the song after the latter successfully retrieved Héctor's photo.

"AAAAAAHAIHAAAI!!"
Ernesto screaming in pain (and in a classical Mariachi style) after being given a foot stomp by Imelda.

Ernesto angrily grabbing Miguel to prevent him from returning to the Land of the Living.

"You're not going anywhere!"

Ernesto being confronted when he's threatening to throw Miguel over the edge.

Ernesto grabbing Miguel, despite Dante's attempt to save the latter.

(Héctor: "Leave the boy alone!")
"I've worked too hard, Héctor! Too hard to let him destroy everything!"

A live footage of Ernesto ranting out against Miguel and the Rivera family, thus exposing his true colors to the horrified audience.

"You think I'd let him go back to the Land of the Living with your photo? To keep your memory alive? No!"

(Miguel: "You're a coward!")
"I am Ernesto de la Cruz, the greatest musician of all time!"

Miguel: "Hector's the real musician! You're just the guy who murdered him and stole his songs!"

"I'm the one who's willing to do what it takes to seize my moment..."

Ernesto throws Miguel over the edge.

"Apologies, old friend, but the show must go on."

Ernesto about to begin the show.

"Ha-ha!"
Ernesto returns to the stage...

...and is booed and jeered by the audience, who had watched the live broadcast revealing his true colors.

Ernesto looks confused as the audience jeer him.

Ernesto's smile disappears, as the audience continue to boo and jeer him.

The conductor snaps his baton in two without a single word.

Ernesto pelted with a tomato.

Ernesto pelted with more food the audience throws at him.

Ernesto sees Pepita rescue Miguel on the jumbo screen, thus realizing his crimes have been exposed the audience.

Ernesto being confronted by Pepita for his heinous actions against the Riveras.

Pepita knocks Ernesto into the air, sending him flying.

Ernesto launched out of the arena and straight toward a huge church bell.

Ernesto gasps as he notices the bell coming loose.

Ernesto gets crushed by the bell again.

Ernesto's tomb with a "forget you" sign for his crimes against the Rivera family, therefore tarnishing Ernesto's legacy permanently.
Add a photo to this gallery 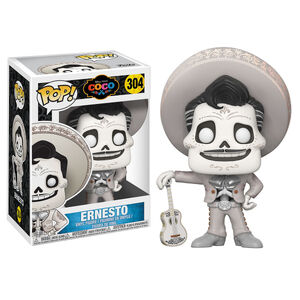 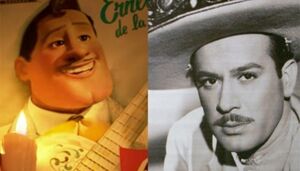 Ernesto de la Cruz next to Pedro Infante, the real life Mexican singer and actor he was based on.
Add a photo to this gallery 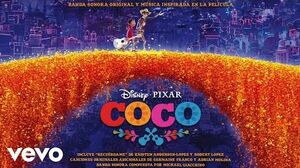 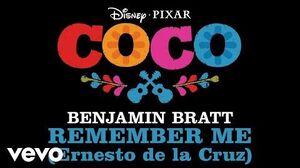 Audio Only)-0
"Remember Me" by Benjamin Bratt 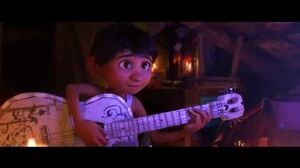 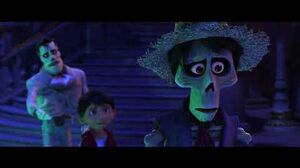 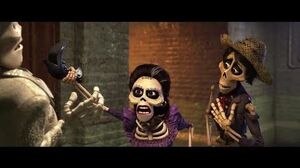 Coco - Getting Back The Photo 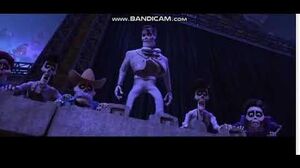 The end of coco - The final battle scene!-1536829099
Add a photo to this gallery
Retrieved from "https://villains.fandom.com/wiki/Ernesto_de_la_Cruz/Gallery?oldid=3301050"
Community content is available under CC-BY-SA unless otherwise noted.