Kill Peter Griffin (consistently failed, succeeded in Family Guy: Back to the Multiverse).

Ernie the Giant Chicken is the secondary antagonist of the Family Guy franchise, appearing as the archenemy to Peter Griffin. He also served as the main antagonist in the videogame Family Guy: The Quest For Stuff.

Every time Peter sees Ernie, he completely stops what he is doing and engages in a lengthy fight scene with Peter that takes them through the entire town of Quahog, often causing chaos and destruction throughout the segment. Peter always seems to have killed Ernie, but then he is revealed to have survived multiple times, which foreshadows their next inevitable confrontation between them.

He is voiced by Danny Smith.

It was suggested that Ernie was created in a lab by Dr. Hartman who relayed the tale of him once trying to clone a chicken but ended up creating a "hostile man sized chicken" that ended up escaping. At some point, Ernie married another giant chicken named Nicole. It was mentioned by Stewie Griffin that the two have at least one child who attends his preschool class.

Their rivalry started when Ernie (possibly unintentionally) gave Peter an expired coupon, leading Peter to assault Ernie and start a massive battle, causing destruction and deaths in the crossfire.

After the third battle, they actually stopped fighting and Ernie took Peter to dinner with his wife, Nicole. They then started their feud again when Peter wouldn't let Ernie pay and insisted that he pay and also because Peter spoke badly to Nicole.

One time when Peter traveled back in time to the 80's he accidentally punched a young Ernie in the face at a dance angering him but another guy stopped Ernie saying "whoa calm down you're probably never going to see him again".

In "Big Man On Hippocampus", Ernie was gardening and hit Peter with an object giving his memory back but then hit him with another one blanking his memory again but Peter's memory was restored because Ernie had an odd number of objects to hit him with.

In the second Star Wars parody episode Ernie is Boba Fett while Peter is Han Solo. He returns in the third, and falls into the Sarlacc's mouth offscreen rather than having an epic battle with Han/Peter as they do in the series.

In the episode "New Kidney in Town", Dr. Hartman tells the Griffins about his failed cloning attempt, which resulted in a violent and destructive man-sized chicken that ended up escaping the lab. That prompts Peter to tell Dr. Hartman that they need to have a talk. In Trading Places, Chris taunts Meg for being a chicken for not wanting to go on Peter's dirtbike and even going so far as clucking like one. This makes Ernie perk up his ears and call the clucking fake.

In the episode "Internal Affairs", Peter has another run-in with Ernie leading to another epic fight, this time because Peter accidentally backs into Ernie's car. During their struggles they land on Stewie's time pad and fight their way across time itself, eventually ending up in a genetic research lab and in space. Crashing back to earth on an oil rig, they continue to fight. Their struggle destroys the oil rig and Ernie is hanged, pierced and then roasted by the rocket engines. But as Peter struggles to shore, Ernie shows he survived.

Ernie also appears in two Family Guy games, Back to the multiverse as a boss/minor antagonist, who appearing in a parallel universe and in Quest for Stuff as the main antagonist, his purpose is to cancel the series "Family Guy" takes to defeat Peter.

Ernie has a cameo in "Trump Guy", where he is seen visiting the Smithsonian Museum with his son, not noticing the brutal fight between Peter and Donald Trump behind them.

In Follow the Money, It's revealed that Ernie is friends with Peter's wife Lois. In that same episode, Lois and Nicole get into a similar fight at a coffee shop, with Ernie trying to convince them to stop. Instead of having excessive violence and causing massive destruction and deaths, they just slap and tackle/wrestle each other, breaking a tip jar and dislocating the character RJ's right arm in the process.

For the Viewer Mail 2 Segment "Chap of the Manor", which shows a British version of the series, Ernie is replaced by a Giant English Pheasant, who accidentally hit's Peter's Counterpart Neville with his chair. The two get into a similar fight except for a few differences: It's a 3 second long slap fight with their arms and they exchange pleasantries when it's over.

Ernie is very hostile, ruthless, and bitter, but only when it comes to Peter Griffin. He and Peter always attack each other on sight ever since Peter started their conflict. This is all without worrying about the massive damage, destruction, and even death that he and Peter cause to Quahog in their bouts, even going so far as to trying to kill each other.

When he and Peter briefly ended their rivalry, Ernie showed an effervescent and sympathetic side, and even apologized at Peter for hurting him before inviting him to dine with him and his wife, Nicole, to be forgiven. In spite of his argumentative and obnoxious attitude to Peter, Ernie also showed much love to Nicole, because he did not like Peter being disrespectful and ill-behaved to her, as both were fighting to figure out who to pay before they start fighting again.

As Peter is the only Griffin family member he despises for their differences, Ernie respects all of the rest of Peter's family even more, as they have nothing to do with his conflict between him and Peter. Unfortunately, his wife, Nicole, and even Peter's wife, Lois, whom Ernie befriended, ended up following the unstoppable mistakes he and Peter had done, as he tried to stop both housewives from repeating this, although the housewives' chicken fight turns out to be completely contrasted from Peter and Ernie's original extreme and brutal chicken fights, as all that they do is relentlessly slap each other.

All in all, Ernie served as Peter's archenemy with the latter's father-in-law Carter Pewterschmidt serving as his archnemesis.

Ernie is virtually immune to death, as he has been stabbed, hanged, chopped up to bits, drowned and even "roasted" to death, but he is always alive. All of his injuries are also healed, even if he has healed beyond natural healing limits, including limb regeneration. Despite his lack of training, the adrenaline rush he gets from even seeing Peter Griffin from miles away, just gives him an immunity to pain and highly developed combat skills, which rival Peter Griffin's combat skills. 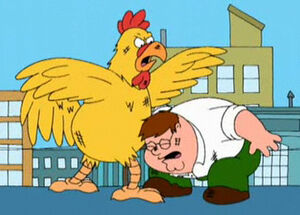 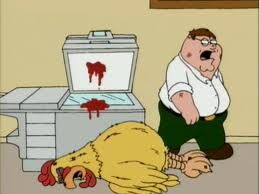 Peter walking away after beating Ernie in a large battle. 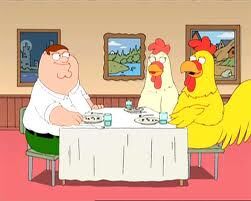 Peter at dinner with Ernie and his wife Nicole. 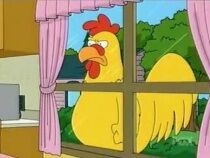 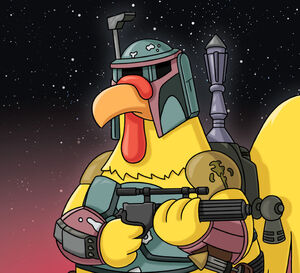 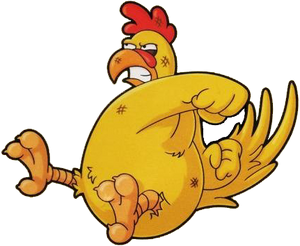 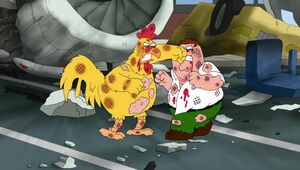 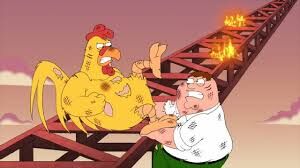 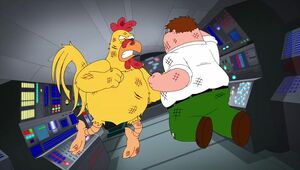 Ernie in "Family Guy: Back to the Multiverse". 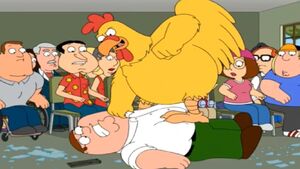 Ernie in "Family Guy: The Quest For Stuff". 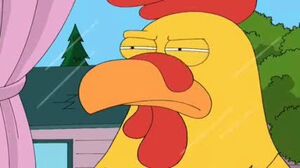 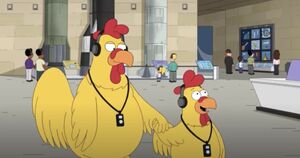 Ernie with his son. 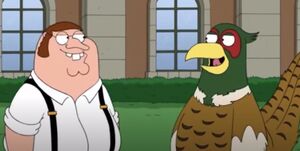 Ernie as a giant English Pheasant. 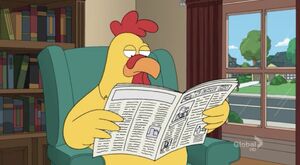 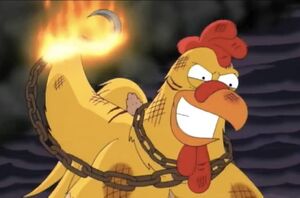 Ernie's evil grin as he attempts to kill Peter. 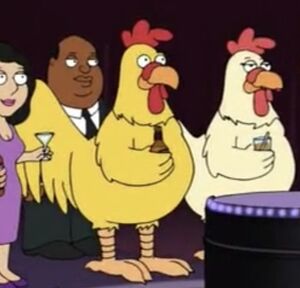 Ernie and his wife at a strip club. 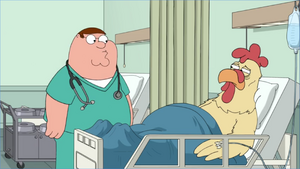 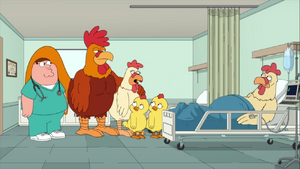 Ernie’s wife with his kids. 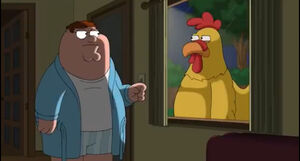 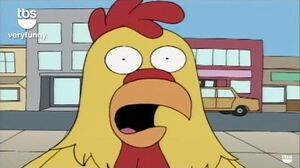 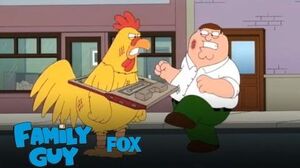