"He"
The Author of All Your Pain (self-proclaimed)

Founder and Supreme Leader of Spectre

He is the founder and leader of Spectre, as well as James Bond's foster brother and archenemy — manipulating behind the scenes of many of Bond's past run-ins, including Mr. White, Le Chiffre, Dominic Greene, and Raoul Silva. He is also responsible for the murder of Lyutsifer Safin's family. Obsessed with the destruction of his adoptive brother, devoted only to his great megalomania, and eager to condemn the world to chaos or tyranny if it suits him, Blofeld is the ultimate villain of the rebooted timeline.

He was portrayed by Christoph Waltz, who also played Hans Landa in Inglorious Basterds, Benjamin Chudnofsky in The Green Hornet, Cardinal Richelieu in The Three Musketeers, Mandrake in Epic, Bert Hanson in Horrible Bosses 2, Walter Keane in Big Eyes and Léon Rom in The Legend of Tarzan.

Blofeld is an unpredictable, dangerous and utterly ruthless megalomaniac of the most diabolical kind. He is unbelievably resourceful and could access vast amounts of weaponry, technology, organizations, and illegal activities. In other words, he was able to create and control Spectre. He is an exceptionally calm, brave, and reserved person and addressed any problems in an insidiously relaxed manner, even if he was helpless while being held at gunpoint.

He is also extremely intelligent but in all of the worst ways. He is a master of psychological warfare and could intimidate people with his very presence, and as with all of his previous incarnations, he runs Spectre like an absolute totalitarian and tyrannical dictator, despising those who failed or betrayed him, with Mr. White being a prime example of what happens if anybody dares to quit Spectre. His sophistication makes him an unbelievable strategist and enables him to outwit practically any opponent; it also makes him far-seeing and cunning to a fault, and he knew all of the details of his opponents' moves, right down to placing a bulletproof sheet of glass between him and James Bond in their final confrontation.

Blofeld is also intensely sadistic, describing himself to James Bond as "the author of all [his] pain". Throughout the film, he ruthlessly plays several cruel and elaborate games with James' mind concerning his past and the people he has lost his entire life - Vesper, M, his parents, etc., torturing Bond by drilling holes in his head and penetrating his brain, remaining calm and smiling when James screams in pain and condemning Mr. White to a very painful death by thallium poisoning. Blofeld also possesses little self-preservation, despite his nefarious manner. Even when finally held at gunpoint by James, he over-confidently goaded him to pull the trigger, though James decided to spare him, knowing that he was not worth it. His extreme sadism ultimately became his defeat because his need of seeing Bond suffer just because he feels that his father favoured Bond instead of him prevents him from a more pragmatic murder, for example, killing him when he is knocked out in Spectre's headquarters.

In prison, Blofeld still retains his grudge toward Bond, organizing the destruction of Vesper's tomb, sabotaging the relationship between Swann and his adoptive brother, and trying to kill Bond in Cuba when he was in a Spectre's assembly by making him the first victim of the Heracles bioweapon that he had his agents steal for nefarious purposes. Just as sadistic and petty as before his imprisonment, he is shown to love taunting Bond about him needing his help and how he was responsible for the last attempts against James, which caused him to quickly distrust Madeleine and sever all communication with her for 5 years. However, Blofeld's pettiness proves to be his downfall, as Bond, enraged by Blofeld's cruel revelation, temporarily loses it and strangles him, unknowingly contaminating Blofeld with the Heracles nanobots that led to his death. 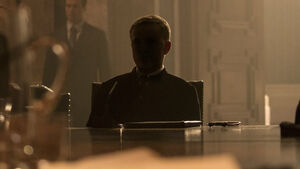 Blofeld exposes himself to Bond and Swann in his Moroccan facility.

Blofeld leads Swann and Bond to the centre of his Moroccan facility.

Blofeld petting his white cat as he surgically tortures Bond.

Bond leaves Blofeld to be arrested by the police.

Blofeld watches as Bond walks away with Swann.

Blofeld accepts his defeat as he is about to be placed under arrest for his crimes against humanity.

No Time to Die

Blofeld held in MI6 custody while speaking to Bond. 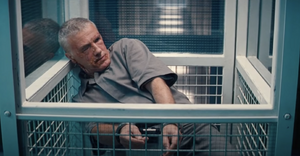 Blofeld's death after being infected with Heracles nanobots by an unaware Bond thanks to Safin's machinations. 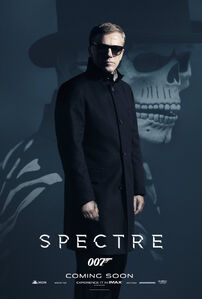 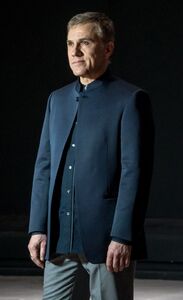 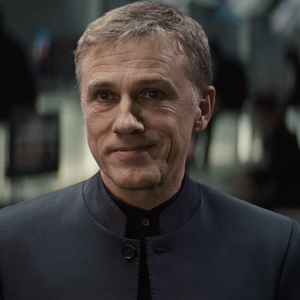 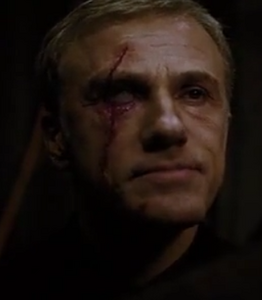 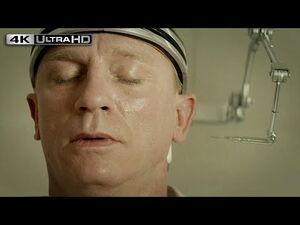 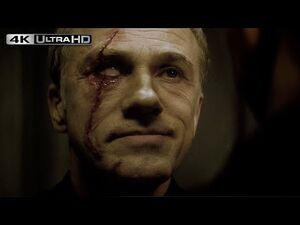 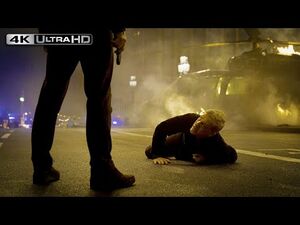 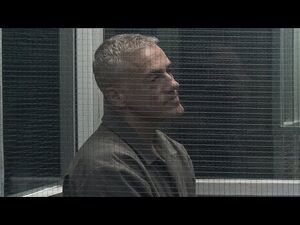