Incompetent Witch Pawn
Eruka Frog is a minor antagonist in the Soul Eater series, forced into it as a result of crossing the series's major antagonist Medusa Gorgon.

Though a coward, Eruka prides herself as a witch and prefers the old ways compared to the changing times and despises anything she views as a threat to witch kind.

She is voiced by Misato Fukuen in the original Japanese dub and by Kate Oxley in the English version.

Having feared the actions of Medusa would doom witch kind, due to her experiments on Crona and her undercover activity at the DWMA, Eruka confronted her with the eldest Mizune after conclusion of a Witches' Mass. After Medusa responds by swiftly sticking her hands into their mouths and threatening to punish them for their disrespect, Eruka and Mizune plot Medusa's death by using her cover in Death City against her.

Ambushing Medusa with Mizune, noticing their opponent's inability to transform, Eruka gloats that she and Mizune placed Medusa in a situation where she can either maintain her Soul Protect as they kill her or dispel it and end up at the DWMA's mercy while they escape unscathed. However, forced to watch Mizune die, Eruka learns that Medusa secretly implanted her snakes into their bodies during the previous encounter. Though she managed to escape as her soul attracted the attention of meisters Maka Albarn and Dr. Franken Stein, Eruka is caught by Medusa in the desert outside Death City and given two choices: being ripped apart by the snakes implanted inside her body or release Prisoner #13 and become a criminal in the eyes of all witches.

Though she succeeds in releasing Free, forming a partnership with the immortal werewolf, Eruka is livid upon learning that Medusa will remove only one snake from her body, the number kept from her, for each task she completes. These tasks include surveying Free's proceeding battle with Maka and Soul in London, as part of Medusa's scheme to see the Black Blood's effect on Soul, and retrieve an attaché case containing a syringe and a vial of black blood needed to revive Asura, taking pleasure in the additional order of destroying Medusa's lab. Eruka was also forced to lie to Mizune's younger sisters to have them aid Medusa in the assault on Death City needed to cover their true mission. After helping Medusa trap the DWMA students and staff members, with her and Crona covering them, Eruka and Free make their way to Asura's resting place to release him with the Black Blood. Once there, Eruka nearly killed herself from being exposed to Asura's madness before regaining herself and reviving the Kishin. Managing to escape Death City with Free during the resulting chaos, glad that the Mizune sisters are also alive, Eruka is extremely giddy and vertiginous when she believed Medusa died in the fight.

However, learning that Medusa survived, Eruka is forced to aid her by serving as a spy within Arachnophobia, the organization controlled by Medusa's older sister Arachne Gorgon, to steal the demon tool Brew. Eruka continued reluctantly aiding Medusa in her various scheme until she was captured by Black Star and made a prisoner in the DWMA. But after sensing Medusa's death, Eruka is later released to assist Death the Kid in negotiations with the Grand Witch, the leader of the witches, to receive her aid in dealing with Asura. However, it only ended with Eruka being among those placed on trial for transgressions against the witches.

As a witch, Eruka uses Soul Protect that cloaks her powers to conceal her true identity from others. In fitting with her frog themed attire, Eruka can transform herself into frog and create tadpole-like bombs that latch onto an enemy. She also has a tadpole familiar named Otama Jackson that she adores. 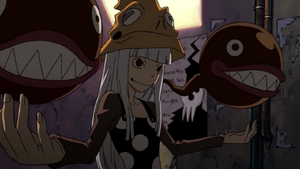 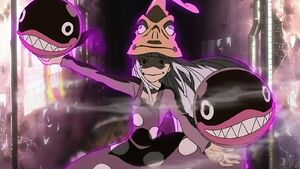 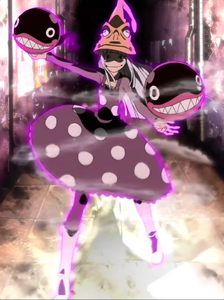 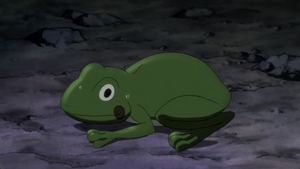 Retrieved from "https://villains.fandom.com/wiki/Eruka_Frog?oldid=4138486"
Community content is available under CC-BY-SA unless otherwise noted.