Warden and primary defender of the Arbor'al

Protecting the nature and the elves.

Destroying the kingdom of Channon and capital to fully protect the nature. (Unknown)

Fanatic Environmentalist Conqueror
Erutan Revol was an important character in the Heroes of Might and Magic IV; The Winds of War. One of Channon's conquerors, the leader and warden of Arbor'al's elves, was an avid protector of nature.

Erutan Revol was the warden of Arbor'al, who felt it was his sacred duty to protect the forests. However, people from Channon began to destroy the forests. Erutan made his decision after a nightmare. In the dream, all the forests of the world were destroyed. The warden decided to "persuade" the other elven cities and jointly destroy Channon's kingdom.

The warden set off and continued to occupy the other druid cities with his troops. There was a small outpost from Channon in the vicinity, and there were druid allies. After Erutan occupied most cities, the druids who had protected the outpost fled. The warden knew it would be a great shame for him to be defeated by the first outpost, therefore he attacked with all his might. The outpost was captured, and the war broke out.

Channon's forces, with whom the barbarians allied, began to cut down the trees of a sacred Vale. For Erutan Revol this was intolerable and he decided to destroy all enemies in the area. His scouts reported that Channon had great groups around the valley and that they had guarded a great relic somewhere. Near Erutan's army was a prison guarded by knights. The knights were killed and the prisoner, who was also a fanatical conservationist under the name Esmeralda, was freed. The two fanatics attacked nearby towns, defeated the barbarians and headed south toward Channon. Here, Channon had enlisted serious forces. Among them were Cardinal, Paladin, Summoner, and Marshall with large numbers of soldiers. However, they were gradually weakened by the constant attacks of Erutan and the creatures of nature. After the weakening of the Chanoni armies, Erutan gradually began to destroy the villages. He burned the farms in anger and killed his inhabitants. This, he said, avenged the deforestation.

He later successfully captured Channon's garrisons and three cities in the South. He also finds the relic that was kept, which was an Emerald Longbow. With his new weapon, after clearing the valley, Erutan pushed forward toward the center of Channon.

Ginvil was a large and well-fortified city, an important commercial center of Channon. The city was created by exploiting the surrounding land and cutting down many trees. Erutan Revol and his armies were obstructed by the city anyway, but for the felled trees he decided to completely destroy Ginvil and take revenge. It was the city of Givil that embodied everything he hated, so he set off with extreme hate to destroy the city. But Channon couldn't let this area occupy, so sent a huge reinforcements to help the city. Erutan knew that if the reinforcements would arrive on time, then everything would be over. The conqueror had five months to complete his plan.

Despite the lower headcount, Erutan managed to break through the defense, but Ginvil had not yet been attacked. Instead, he occupied a small town Werther' and the Bothain Mines. Here he plundered the treasury of the Red Dwarves, killing many of the dwarves, and captured the gold mines of Channon. He then wanted to demolish a pub but when he saw that the building's owner was an elf, he reluctant spared him and didn't destroy the building. The owner once used to be the leader of an elf village on the site of Werther, but the people demolished the elves' buildings and built a city for the people. As Erutan took over the city, the owner of the pub helped him. He showed him a secret route on a map. Then he packed up and left.

Erutan marched full force towards Ginvil, using the secret route. The defenders were completely shocked by the surprise attack, but there were still enough troops to defend the city. However, Erutan defeated them and, after occupying or destroying the surrounding buildings, launched a final attack on the fortified city. Ginvil resisted and after a bloody battle, the elves won. Channon has lost a lot of troops here. The attackers began to kill, and Erutan wanted to completely remove all traces of the city. He completely demolished the walls, broked the roads, destroyed every man-made structure. Once nature has begun to strengthen here, he heads towards Rylos, the capital of Channon.

Erutan Revol was a tall, strong-bodied young elf with long light brown hair and greyish-green eyes. He wore light and dark green clothes and brown boots. He also wore a brown headband on his head.

Erutan Revol was a proud, determined, very self-willed elf. Perhaps its most important quality is his fanatical and overwhelming love for nature. He was completely intolerant of those who destroyed the forests or the nature, and immediately responded with murder and revenge. The other conquerors (even Baron von Tarkin) liked to joke that even stepping on the grass in the eyes of Erutan Revol was a deadly sin. Erutan did not insult the other conquerors, but he was more proud of himself and wanted to show particularly Mongo how powerful he was as a protector of nature.

Erutan hated people, considered all but the enemy of nature and evil to be destroyed. Spazz Maticus spoke of the elves as wanting to destroy all man made things and return them to nature. He had completely demolished every man-made building, he did not tolerate anything that came from humans.

Erutan Revol was a strong leader of the elves. He was able to destroy Channon's much stronger troops and allies with his own power and strategic leadership. He led the elves all the way to Rylos. 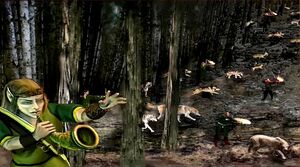 Erutan and his minions attack. 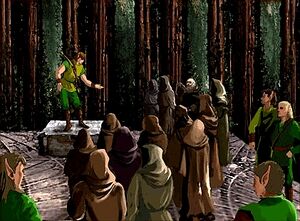 Erutan Revol "convinces" the other elves and the druids. 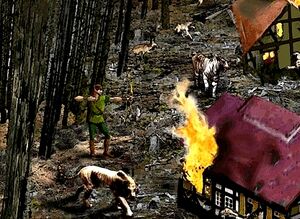 Erutan attack a village.
Add a photo to this gallery

Retrieved from "https://villains.fandom.com/wiki/Erutan_Revol?oldid=3485404"
Community content is available under CC-BY-SA unless otherwise noted.