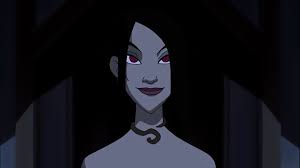 Erzsebet Ondrushko is the central antagonist of the animated superhero film Hellboy: Blood and Iron. She is the of the high priestess of Hecate, who gives her eternal youth and beauty in return for her services, and a vampire.

She was voiced by Kath Soucie, Maketh Tua in Star Wars Rebels.

Ondrusko was a beautiful Hungarian Countess who became obsessed with keeping her beauty and youth, so she gave up her soul to the goddess of witches, Hecate, and agreed to become her high priestess in exchange for eternal youth and beauty. Then she murdered six youth girls and then she bathed in their blood believing that it would keep her youth forever. She then continued to murder youth women and bath their in blood for centuries.

In 1939, Ondrusko lived in a Castle near a village in Transylvania, she then murdered five young women for blood, then for her last target she choose a women named Anna, who was engaged. Ondrusko then met Anna at seamstress shop, where she claims she is filling for the seamstress, Marie, while she is taking care of her sick baby, when in reality she murdered Marie and baby, and she says that she just came from the opera to explain her outfit, and then gives Anna her wedding gown. When Anna then mentions about how she was afraid to come the shop after all of Ondrusko's murders, but she was convinced by the local priest, Father Lupescu, she would be safe as long he protects to the village with his church, then she decides to pay a visit Father Lupescu before revealing herself to Anna as a vampire and kidnapping her. Ondrusko then visit Father Lupescu at his church with mind controlled wolves and reveals to him that she knows that he is coming with paranormal scientist Trevor Bruttenholm save Anna and mocks him and God by telling him about what her goddess gives her while his god does nothing. After Professor Bruttenholm leads to search party which includes Father Lupescu, Anna's Fiancé, and two police officers, they find Ondrusko had already murdered Anna and bathed in her blood, which scares Father Lupescu into leaving the search party, and then she murders one of the police officers. After the Professor and the others flee Ondrusko summons her wolves who kill Anna's Fiancé, and the other police officer. She then confronts Bruttenholm, who pulls out a flask full of holy water and throws it into Ondrusko's face which scars her. Furious at Bruttenholm for ruining her beauty she attacks him, but she brings them outside at sunrise and Ondrusko turns into ash.

Retrieved from "https://villains.fandom.com/wiki/Erzsebet_Ondrushko_(Hellboy_Animated)?oldid=3465087"
Community content is available under CC-BY-SA unless otherwise noted.