Working with Dedede to help get rid of Kirby.

Escargoon (Escargon in the original Japanese version) is the secondary antagonist, as well as the tertartagonist of the anime series Kirby: Right Back at Ya!. He is King Dedede's right hand man who works with him to defeat Kirby once and for all but their plans always fail. He is very loyal to his boss but is not as menacing as King Dedede himself is.

He was voiced by Naoki Tatsuta in the Japanese version, and by Ted Lewis in the English version along with King Dedede.

Escargoon is an anthropomorphic snail who is Dedede's right hand man. His skin is lavender, and his shell is dark green. His eyes are green as well, and rise over the rest of his head on a stalk. He has short, light green hair and a goatee of the same color, and only four teeth. When he moves, he often makes a whirling noise.

Escargoon has two distinct sides to his personality. There's the part of him that helps Dedede with his schemes and tricks, but he seems to have a genuinely nice side to him that only appears in extreme situations. Unlike most of the other residents of Cappy Town he does not dislike King Dedede, though the latter often whacks him with a mallet.

Escargoon's mannerism gives the impression of someone past his youth, and he tends to get grumpy with the children of the village. He can be mean and naughty towards people in general, using his status as the King's assistant to lend him the right to boss people around or threaten them with the death penalty (in the Japanese version only). It is not clear whether he really is mean and only acts nice when he needs something, or if he has a good side of him that does not show because he is perpetually helping Dedede with his schemes in order to gain his approval. Since his mother says Escargoon is cowardly and would never hurt anyone, it would seem that the latter situation is more likely.

Escargoon can be cheerful and animated at times, and often does effeminate things such as wearing frilly aprons with hearts. (Other than that he rarely wears any articles of clothing, except an occasional bow tie, sun hat, or scarf in cold weather.) He is the usual host of Channel DDD for newscasts and special programs.

Escargoon is intelligent with a wide range of knowledge in botany (he wrote an encyclopedia on the subject called "The Encyclopedia of Botanica"), chemistry and electronics/robotics and even tried to decode an ancient scroll. When Dedede doesn't order something from Nightmare Enterprises, he tends to use one of Escargoon's inventions instead, such as a formula that turns things into monsters. In "The Empty Nest Mess" He builds various machines such as a robotic grasshopper, submarine, missiles, and even a robotic version of himself. However in "Fossil Fools: Part 1" when he and King Dedede were asked questions from Doctor Moro, they both were unable to give concise answers. Unlike King Dedede, he does not trust the N.M.E. Salesguy, and rarely orders things from him.

He also has a somewhat persuasive personality and a tendency to make comparisons and similes, as well as using higher vocabulary words and alliteration in his dialogue; for example, in "Pink-Collar Blues", he compares asking the Waddle Dees a question to "interrogating a mime troupe." and in "Waddle While You Work", he calls Dedede a "big blubbering blob of blubber".

Escargoon in the opening of Kirby: Right Back at Ya! and first episode of the series. 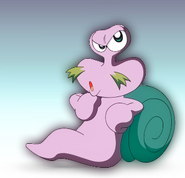 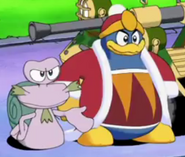 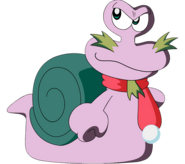 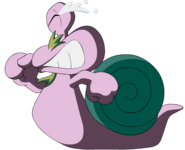 Escargoon running.
Add a photo to this gallery

Retrieved from "https://villains.fandom.com/wiki/Escargoon?oldid=4059163"
Community content is available under CC-BY-SA unless otherwise noted.