Escherion is the first Lord of Chaos, Escherion is a powerful Chaos sorcerer with the power to invert people and things using the Staff of Inversion.

He is a tribute to M. C. Escher. and his artwork. The town of Mobius, the forest of Faerie, the ruins of Cornelis, and his own upside-down tower are based off of the unique, disorienting drawings of Escher, and are caused in-game by Escherion's Staff of Inversion.

Escherion arrived in Mobius with his army and used his Staff of Inversion to turn everything inside-out, including it's Guardian Tower which he used as a base. His henchmen includes Slugfit, Cyclops Warlord, and Head Gargoyle. His main reason to send his armies throughout the entire Chiral Valley is to look for the Runix Cube. The hero have to go to the locations to retrieve the pieces of the Runix Cube. First in Mobius, then the Faerie Woods, and finally Cornelis. Upon recovering all three pieces, the hero uses the disguise of a pizza delivery guy to infiltrate his tower and fight through the soldiers there. After besting Head Gargoyle, the players finally confront Escherion. They throw the Runix Cube at him not knowing what it does. Afterwards, Escherion takes the opportunity to grab the Cube, thank the hero and eject him from the tower, then awakens the Lake Hydra (the first of the "Chaos Beasts" that accompany each Chaos Lord) under orders by Drakath. The hero must defeat the Lake Hydra before reentering the Tower of Relativity

When the Lake Hydra is defeated, the character then goes back to Escherion. After taking out the Staff of Inversion and Escherion, the character demands that Escherion leave Chiral Valley and never return. When Escherion retaliates, the character uses a Mirror Shield found in Cornelis to reflect Escherion's spells back to himself. When he tries to polymorph the character, he ends up turning himself into a toad which undoes the effects of his inversion spells. Drakath gets word of this and prepares his next Lord of Chaos after stating that Escherion has served his purpose. 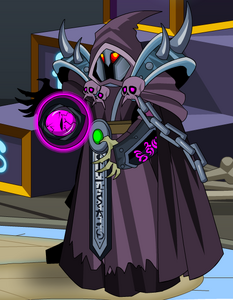 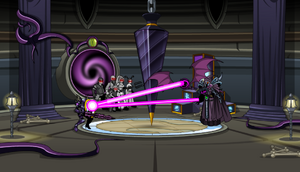 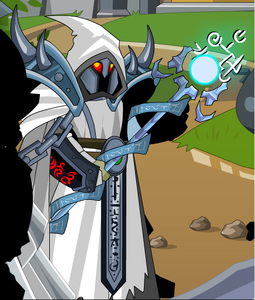 Escherion as the 1st lord of order