My crazy, waterbending ex-girlfriend (by Bolin)

Daughter of Chief Unalaq and sister to Desna

Chief of Northern Water Tribe with Desna (after death of Unalaq)

Seek vengeance on Korra for "stealing him" (formerly).

Eska is the daughter of Unalaq and twin sister to Desna. She appears as one of the two secondary antagonists (alongside Desna) in Book 2: Spirits of The Legend of Korra and as a cameo character in subsequent seasons. Introduced as a potential love interest to Bolin, she quickly showed herself to be a sadistic and emotionally abusive girlfriend, who also enforces her father's malevolent agenda after Korra turns on him.

Eska first appears in the premiere of Book 2 alongside her equally emotionless brother Desna. Bolin takes a liking to her and attempts to woo her. However he quickly realizes that he has gotten more than he bargained for when Eska proves to be a controlling and emotionally abusive partner who delights in making her "lover" miserable, forcing him to obey her and her brother's every whim. Eventually, Bolin can take no more, and Asami and Mako suggest that Bolin stand up for himself. Bolin tries and fails, prolonging his suffering. Eska ultimately decides that she desires to marry Bolin outright, at which point Bolin falls deeper into despair. Fortunately for him, he is able to escape from Eska when Team Avatar returns to Republic City, sending Eska into a rage. Blaming Avatar Korra, she vows to get vengeance on her for ruining her wedding and "stealing" her boyfriend, but she and her brother eventually team up with Korra because her father's deeds were exposed.

After Unalaq's death at the hands of Korra, Eska becomes the new chief of the Northern Water Tribe along with her brother, both finding their new responsibility to be boring. She is pleased to discover P'Li's secret prison, commenting on how she could have been incarcerating many people. She is seen helping Zuko and Tonraq in the fight against Zaheer and his band of criminals. They are subdued by Ming-Hua, who traps them in blocks of ice, and Zaheer escapes. 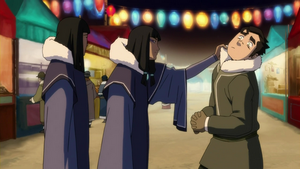 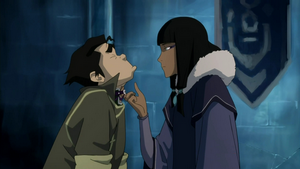 Eska decides that she and Bolin must be married 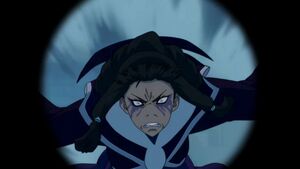 Retrieved from "https://villains.fandom.com/wiki/Eska?oldid=4079839"
Community content is available under CC-BY-SA unless otherwise noted.