Animalistic Minion
Esmeralda is Quasimodo Wilson's pet rat and the secondary antagonist of Hotel Transylvania. She is always accompanying the great chef.

Esmeralda first appears when Quasimodo interrupts Dracula about a dish. She begins sniffing Jonathan and tells master that he is human. Dracula quickly denies this and sends both of them off.

Later on in the film, and Quasimodo are search for Jonathan, plotting to capture him and turn him into human pot pie. The two succeed in kidnapping Jonathan and drag him off to the kitchen to cook him. Dracula comes and saves him, and again, tries to convince Quasimodo Jonathan isn't human. Quasimodo says he'll believe him if Jonathan scares Esmeralda. Jonathan tries and fails, being scared by Esmeralda himself. Dracula freezes Quasimodo and leaves him.

Esmeralda then appears at Mavis's party, along with her master as they were planning to reveal Jonathan is in fact human. While at first, the other monsters don't believe them, Esmeralda attacks Jonathan, showing that he is a human. It is completely unknown what happened to Esmeralda following Quasimodo's paralyzation, but it is likely that she was banished away from the hotel due her involvement in Wilson's manipulative scheme. 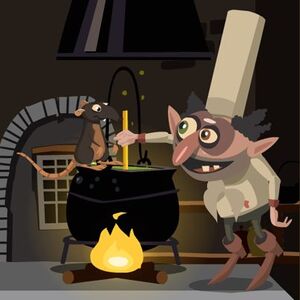