Creating cyborgs and testing them.

Create a cyborg army with Akan and rule the world (failed).

Estelle is the secondary, but secret antagonist of the 2016 film Hardcore Henry. She was thought to be the wife of Henry, but in reality is Akan's Wife, as both had ran a field test on Henry and used his memories to manipulate Akan's cyborg army into doing anything to rescue their "Wife'.

She was portrayed by Haley Bennette.

Nothing is known about Estelle, but in the limited issue of "Hardcore Akan" reveals that she attended the same college with Akan and had defended him from a group of boys who blamed him for copying an idea.

Then Akan obtained his psychic abilities and rose through power with his founding company that specializes in Advance Robotics, with her Husband at side, both had ran a variety of field-tests on other cyborgs until arriving on Henry, setting the rest of the events in place.

During the entire movie, Estelle greets Henry and claimed that she was his "Wife", and had replaced his missing arms and legs with cybernetic prostheses.

Before she could give Henry a voice, a group of mercenaries infiltrated the lab, lead by Akan. As Akan claimed Estelle's research as his property, he kills Estelle's scientists before attempting to murder Henry, but both Henry and Estelle flee in a escape pod, landing in a highway in Moscow, then Estelle was kidnapped by Akan's mercenaries, who tried to kill Henry but failed. Estelle then contacted Henry during his attempted Heart Transplant with Slick Dimitry but glitched out.

Later Estelle was held hostage in a moving Armored Van that was heavily guarded, but Henry and Jimmy tore there way through and Henry successfully reconcile with Estelle only for a short moment until Akan and his right hand man Yuri beaten Henry and then threw him into a Highway, separating them again.

Then Henry has fought and decimated Akan's Cyborg army on top of his Company Building, Akan severely injures him until Henry heard his Wife's concerned voice, but in reality, this shows her true colors and reveals that Estelle was Akan's Wife and had revealed their plan on dominating the world with a Cyborg Army with plans of Terrorist Attacks and even said that Henry was only used for as a "Field-Test".

Then an enraged Henry successfully killed Akan by decapitating him with his cybernetic eye stalk, then jumping into an Escape Helicopter with Estelle in it. As Estelle demanded Henry of her husband, Henry simply showed her Akan's Decapitated Head, this set her off in anger and shot Henry in the chest with a gun. Before she could finish Henry off, the bullet ricochets off Henry's robotic knuckle and hits Estelle, wounding her and nearly fell off the helicopter, hanging onto it. Estelle desperately begs Henry to save her, telling him to "Listen to his Heart". Henry slams the door shut, chopping all of her fingers off, sending her to fall to her death. 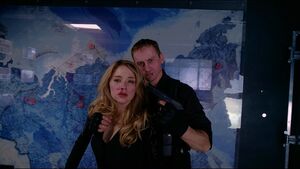 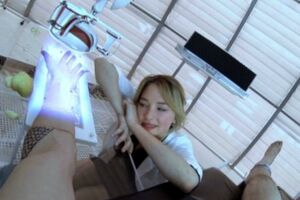 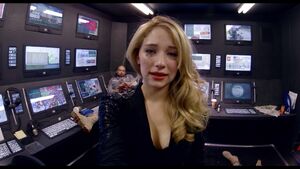 Estelle reuniting with her "Husband" Henry.

Estelle's death.
Add a photo to this gallery
Retrieved from "https://villains.fandom.com/wiki/Estelle?oldid=3821314"
Community content is available under CC-BY-SA unless otherwise noted.