Lord Etemon (likes being called that by his henchmen)

Loves being a star.
Improving and controlling his signature Dark Network.

Rule the Server Continent and soon the Digital World.

Etemon is the second main antagonist in Digimon Adventure 01, and also a minor villain in Digimon Fusion. He is an evil Digimon who is like an Elvis wannabe in an orange Super Monkey Suit, complete with sunglasses. Unlike the first major villain, Devimon, Etemon is an Ultimate Digimon, and also comical and more of a crime lord than a dark lord, which would be the next Ultimate Digimon, Myotismon. He is also the secondary arch-nemesis of the Digidestined.

Etemon is an Ultimate Digimon, an Elvis-type man in an orange monkey suit. He also has a stuffed Monzaemon attached to him. He sometimes carries a microphone or an electric guitar. He always wears shades and never removes them.

As MetalEtemon, he resembles a metallic version of himself, only he wore a gold necklace, has a golden toothy smile, and has red Chinese symbols on his chest. He has a stuffed WaruMonzaemon attached to him.

Etemon has the character of Elvis Presley impersonator. He is often frustrated when people fail to acknowledge his overinflated ego. Etemon considers himself to be a great singer, and often forces his minions to praise his terrible music. However, he also beats them up when they dance to it.

Unlike most of the villains in the first season, Etemon is not exactly the most intelligent and tech-savvy, as he relies on his Gazimon henchmen to work around his network system and computers. And its possible that Etemon captured Datamon so he can force him to access his webmaster, administering his network. To do this, he challenged the robot Digimon, and beat him, severely damaging Datamon. However, the ignorance of using the conniving robotic Digimon brought some misery as after Datamon repaired himself and gained control over Etemon's network, just enough to torture Etemon.

When he returned as MetalEtemon, he was still a great singer.

As MetalEtemon, he can endure every attack from any Digimon and summon dark energy from the sky.

The DigiDestined encounter him on the continent of Server. Etemon is the master of the Dark Network, and many of his servants like Tyrannomon are connected to the dark cables. Etemon also has many Gazimon and Monochromon working for him. At one point, he makes a clone of Greymon and sends him after the DigiDestined, but the clone and most of Etemon's machinery are destroyed when the real Greymon digivolves into the evil SkullGreymon.

Etemon's base of operation is an inverted pyramid with an underground, right side up pyramid beneath it. In the upside down pyramid, Etemon and his Gazimon henchmen have surveillance room, observing all the action outside the pyramid. There are passages that lead to an electric fence that which is partcially a fake wall leading to the second pyramid. Underneath that is the center of Etemon's Dark Power Network, which anything suck in there is lost forever.

He is enemies with another antagonist, Datamon. After the DigiDestined unwittingly release Datamon, he betrays them and tries to fight Etemon, but was defeated again and kidnaps Sora and Biyomon to make a clone of Sora. Tai was able to enter the pyramid and rescue Sora and Biyomon, but Datamon tries to stop Tai, but they immediately escape. Upset by the loss, Datamon deletes the clone, only for Etemon to arrive shortly to dismantle him. Datamon then detects the Dark Networks has absorbed as the floor vanishes. Etemon tries to escape, but Datamon grabs his leg to come with him. Datamon drops computer viruses into a pit leading to the core of the Dark Network, which goes haywire and growing out of control, increasing the negative energy it preserves by absorbing all of it in the Digital World, including from those who possess it. All of Etemon's servants are sucked into the pit and destroyed, and soon both Datamon and Etemon fall into the nexus of the Dark Network. Datamon disintegrates, but Etemon, who wields negative energy himself, fuses with the core of the Dark Network, and becomes more powerful. After the pyramids collapse, Etemon turns towards the DigiDestined and attacks them with dangerously-modified Dark Network orbs, which create wormholes in anything they touch. However, Greymon is able to Digivolve using the Tag and Crest, this time into MetalGreymon. Etemon tries to destroy MetalGreymon with a Dark Network attack, but smashes the orb with his Metal Claw. Summoning all of the power of the Crest, MetalGreymon defeats Etemon by blasting the Dark Network with his Giga Blaster, ripping open a wormhole and Etemon was banished into the black hole.

However, Etemon was not destroyed; the black hole spit him out and scattered his digital information across the universe. He later came back together and returned to the Digital World only after Digivolving to his Mega form, MetalEtemon. MetalEtemon then started to seek revenge on the Digidestined, but he only found Joe and Mimi. He and Puppetmon got into a fight while Joe, Gomamon, Mimi, Palmon, and Ogremon had time to escape. After he got tired to fighting Puppetmon, he continues to pursue the two remaining Digidestined while SaberLeomon gave them a ride. Leomon confronts MetalEtemon and Digivolved to SaberLeomon to fight him. Gomamon Digivolved to Zudomon to join the fight. Ogremon wants to fight MetalEtemon, but Mimi tries to stop him since he was in no shape to fight. MetalEtemon attacks Mimi, but SaberLeomon takes the blast, fatally wounding him. Zudomon was able to hit MetalEtemon's chest with his Vulcan Hammer attack since it was made of Chrome Digizoid, and SaberLeomon summoned the last of his strength to impale MetalEtemon with his claw, destroying him for good.

A huge army of Etemon serve Musyamon, and Blastmon. They turned out to be ninjas. BaliBastemon defeated the soldiers of Etemon, then Shoutmon used the Star Sword and destroyed Etemon.

Etemon appeared as a recurring boss in Digimon Adventure. 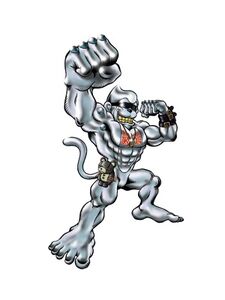 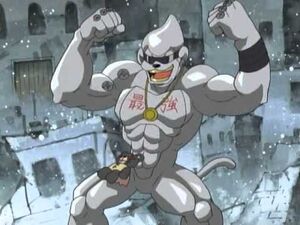 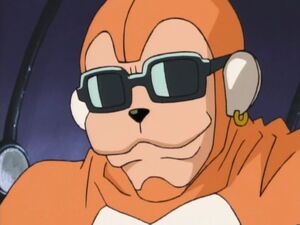 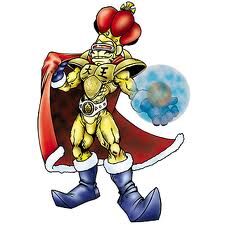 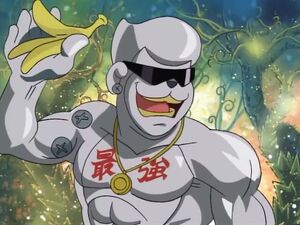 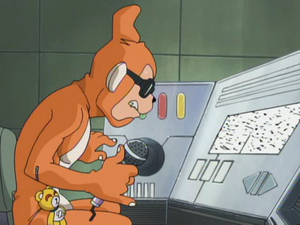 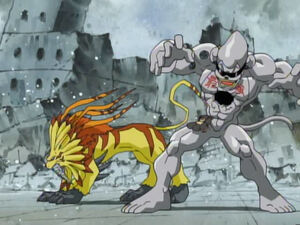 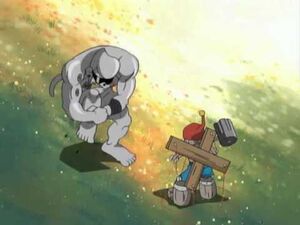 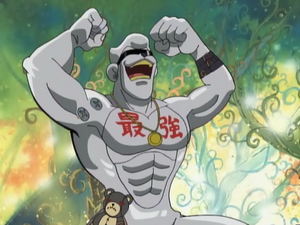 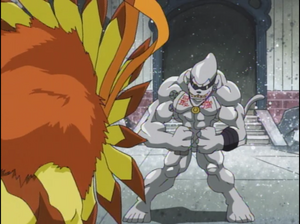 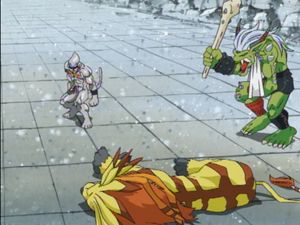 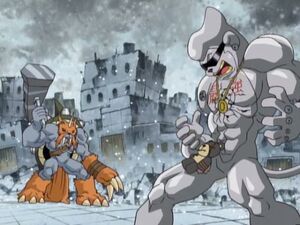 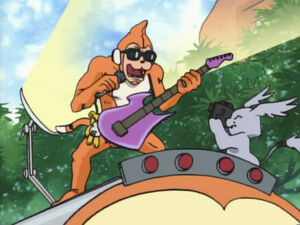 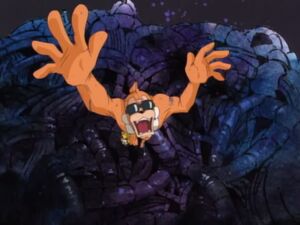 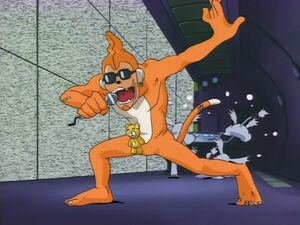 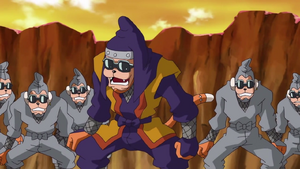 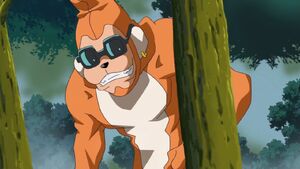 Retrieved from "https://villains.fandom.com/wiki/Etemon?oldid=4281721"
Community content is available under CC-BY-SA unless otherwise noted.