Program The Snowflake into a destructive virus (succeeded).

Eteon is the main antagonistic faction of the 2019 action film Fast & Furious Presents: Hobbs & Shaw. They are a secret terrorist organization known for modifying and utilizing ex-MI6 agent Brixton Lore as a means of deploying The Snowflake and eliminating humanity.

Little is known about Eteon, but Deckard Shaw is the only one who learned about the existence of this secretive terrorist organization.

Brixton served alongside Deckard on countless missions for MI6 until his worldview and perspective changed. His apathy towards humanity and its actions allowed him to be recruited by Eteon, who demanded that he recruit Deckard as well. When Brixton was trying to enlist his fellow colleague, MI6 ordered Deckard to kill him by shooting a bullet into his head. However, Brixton survived and Eteon recovered his wounded body and modified him with various cybernetic and mechanical implants, turning him into a super soldier.

The former had followed them with strong loyalty and believed in Eteon's ideology of saving humanity and steering them into the right direction. They had commissioned Professor Andreiko to develop the Snowflake, a carrier that could deliver vaccines. Contrary to Andreiko's expectations, they reprogrammed the Snowflake into a virus that would wipe out humanity.

Theft of The Snowflake

MI6 soon became aware of The Snowflake's existence, but were unaware of who created it. After managing to track The Snowflake's position, the agency deployed the field team to infiltrate the facility in London to obtain the virus, although with the added stipulation that they were to use electrical rounds on the soldiers guarding the virus, in order to interrogate them afterwards. After subduing all of the men, agent Hattie Shaw was sent into the convoy to extract and secure the virus.

However, Eteon sent Brixton to assassinate the team and collect the virus. As Brixton murdered the other agents, Hattie took the opportunity to escape from the facility, although not before injecting herself with the virus. Using one of the agents' radios to impersonate him, Brixton informs MI6 that Hattie attacked the other agents before fleeing with the virus. Brixton then warned his soldiers to exercise caution when apprehending Hattie, and stressed the importance that Hattie should take the brunt of responsibility for their crimes.

Meanwhile, Eteon located Hattie who was being held in the CIA's black site. Brixton and his soldiers attacked the building and kidnapped Hattie. Luke Hobbs and Deckard worked together to liberate her, with Hobbs rappelling out and Deckard used an external elevator. She attacked Brixton to free herself, and as he prepared to retaliate, Hobbs crashed into Brixton. Hobbs then fought with Brixton, although his ocular eyes allowed him to track and counter Hobbs' movements. Deckard soon joined the fight, and he was shocked to see Brixton alive, as Deckard believed that he was killed eight years ago.

Deckard retrieved his super car and, along with Hattie and Hobbs, attempted to flee Eteon's pursuit. Brixton was able to keep up with them using his custom motorbike, although Deckard tricked him into slamming into a bus. Despite being able to survive, his bike was disabled, forcing Brixton to temporarily abandon the pursuit and utter that there would be a war between them.

Brixton returned to Eteon Headquarters, where he framed both Deckard and Hobbs as traitors using the global media outlets they controlled. The anonymous director of Eteon informed him that Hobbs and Deckard were to be apprehended alive, as Eteon wished to recruit them. Brixton attempted to remind them that Deckard had already refused once, but was forced to relent once he was threatened.

Brixton was then notified that Margarita captured Hattie and was outside her Moscow building to bring her in. Brixton demanded to know whether Hobbs and Deckard were with her, and even threatened to kill Margarita if she was lying. As Brixton escorted Hattie to the extracting machine at Eteon's laboratory in Ukraine, he became angered when Hattie suggested that he was killing people and committing crimes for the sake of money, furiously telling her that the crimes he committed was for the greater good of humanity.

Hobbs and Deckard soon infiltrated the building, and Brixton and his army laid there in wait. After having the pair rendered unconscious, Brixton electrocuted them four times, attempting to recruit them, and ultimately decided to kill them when they refused to join Eteon. However, his plans were impeded by Hattie's arrival, who escaped her restraints and held Brixton at gunpoint, as she had overheard Brixton's gloating to Deckard of framing him. Brixton gleefully informed Hattie that the guns would not work without fingerprint authorization, only for Professor Andreiko to burn him with a flamethrower. As Andreiko incinerated and killed the other soldiers, the Shaw siblings and Hobbs began their escape, prompting Brixton to snap Andreiko's neck, killing him, and pursuing the trio on his motorbike.

Brixton landed on the back on the truck that the trio were using to escape. However, as Deckard and Hobbs had placed an explosive timer within the building, the laboratory began to self-destruct, causing tons of rubble to fall on them. As Brixton dueled with Deckard on the back of the truck, Hobbs commanded Hattie to drive the truck while he aided Deckard. Despite the duo not strong enough to defeat Brixton, the ensuing rubble fell on him and the vehicle; while Brixton survived along with Hattie, Deckard and Hobbs, the machine required to extract the virus was damaged during the chaos.

Due to the machine to extract the virus had been damaged, Deckard, Hattie and Hobbs traveled to Samoa to enlist the aid of Jonah Hobbs. Brixton's body was repaired and Eteon managed to track their flight to Samoa, prompting Brixton and a handful of soldiers to travel there. As Brixton and his soldiers approached the Hobbs residence, Hobbs gave a Samoan war cry along with his brothers, igniting a climactic battle.

Since the extraction process took thirty minutes, Hattie sat out most of the battle, although she was forced to join when she was attacked by Eteon soldiers. While she succeeded in disarming a number of them, she was later apprehended by Brixton, who kidnapped and brought Hattie to his helicopter, forcing Deckard, Hobbs and his brothers to attach their trucks on the helicopter to prevent it from taking off, causing it to crash. Hattie, along with Brixton and one of the soldiers, survived the crash. Brixton ordered the lone soldier to empty his gun into Hattie's heart once she had successfully expelled The Snowflake, and left to subdue Hobbs and Deckard.

Hobbs and Deckard fought Brixton, but realized that he was able to pinpoint their individual attacks and counter them, and was only able to be hit when they attacked at the same time. Deciding to truly work as a team, the duo announced that they would watch each other's backs and sustain a blow so that the other could attack Brixton, defeating the super soldier in combat while Deckard stole a gun from a dead soldier.

With only a few seconds left on the machine, the Snowflake was successfully extracted and Hattie proceeded to attack the remaining soldier, rendering him unconscious. Due to Brixton's defeat and Eteon's remaining soldiers taken captive by the Hobbs family and Samoan warriors, the anonymous director chose to activate the kill switch within Brixton's mind, terminating him and putting Hobbs, Hattie and Deckard on their radar. Hobbs did the same to the director in response. 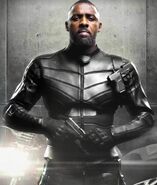 Stand off in Eteon Laboratory