Eternal is evil art organization in the anime Yes! Pretty Cure 5 GoGo!. It is reminiscent of the real life British Museum. The head, Boss is shown to have his own secluded office. The main purpose of Eternal was to steal valuable items from other dimensions.

The corridors are filled with the items Eternal has stolen in protective glass cages. The lights are dim and the floor is carpet in red. Before items are put on display they are kept in a large storeroom which was shown in episode 47 and 48. It is shown to be very large.

The outside is very Romanesque, as with most buildings in Pretty Cure 5. There are many windows and a large bird is on the dome of the roof. There are also long pieces of cloth depicting Eternal's logo i.e a five legged bird. There are also columns holding the building up and there is a courtyard in front of the building. In virtually all it's appearances Eternal has got a gloomy feeling in terms of the sky. 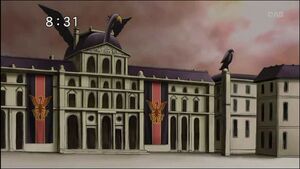 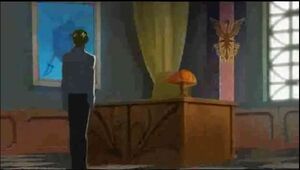 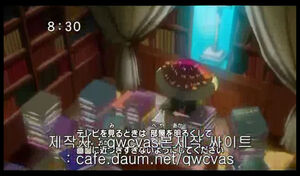 Shibiretta's office
Add a photo to this gallery
Retrieved from "https://villains.fandom.com/wiki/Eternal?oldid=2656205"
Community content is available under CC-BY-SA unless otherwise noted.