Absorb all power in the world.

Eternatus, also known as the Gigantic Pokémon, is a Legendary Poison/Dragon-type Pokémon introduced in Generation VIII. It serves as the overarching antagonist and final boss of Pokémon Sword and Shield.

Eternatus is an alien that appeared 20,000 years ago when the meteorite that contained it impacted the Galar region of the planet. To recharge itself, Eternatus absorbed everything it could harness within its core, an event referred to as the "Darkest Day". That was until two heroes, along with Zacian and Zamazenta, the guardians of the Galar region, defeated the monster and sealed it away. From within its imprisonment, Eternatus leaked energy across the Galar region from the core on its chest. When Pokémon come in contact with Eternatus' energy, they enlargen in size, a term referred to as Dynamaxing.

Chairman Rose of Macro Cosmos would awaken Eternatus from its slumber to inherit its power to restore the energy crisis affecting Galar from inside the Energy Plant, feeding it his Wishing Stars to produce Galar Particles. But because Eternatus was not fully healed of its wounds, it grows feral and destroys everything in its path like it did thousands of years ago. Champion Leon tries to catch Eternatus in order to calm it, only for it to break out of his Pokéballs. Leon then orders the player to fight and defeat Eternatus, which they manage to do. However, this only angers Eternatus further, making it absorb all remaining Dynamax energy within the Galar region. This stops all Dynamaxing Pokémon, but turns Eternatus into its own Gigantamax form, "Eternamax".

While attempting to battle Eternamax Eternatus, the player and Hop were completely unable to command their Pokémon due to Eternatus' interferences. Suddenly, Hop remembers about the Sword and Shield relics, and uses their powers to awaken Zacian and Zamazenta. The relics return the two to their true forms, restoring enough energy to let the duo, the player, Hop, and their Pokémon defeat Eternatus. The player then throws a Pokéball and manages to capture Eternatus, soothing its wrath and restoring Galar back to normal.

Eternatus is a large dark blue skeleton-like dragon with wings and some type of head armor on its head. In the middle of its ribcage is a pink crystal, which is its core. As Eternamax, the dragon takes the form of a long hand-like appendage that rotates around the core. 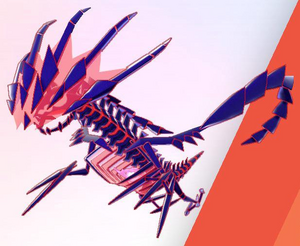 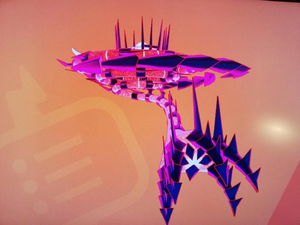 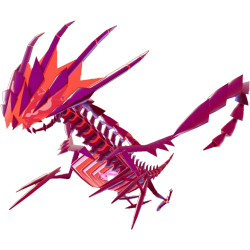 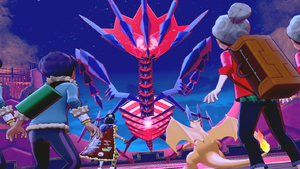 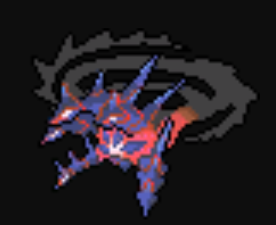 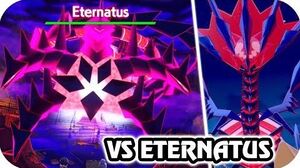 Retrieved from "https://villains.fandom.com/wiki/Eternatus?oldid=3447294"
Community content is available under CC-BY-SA unless otherwise noted.