Saving his daughter through a deal with Maxwell Lord

Villain by Proxy
Ethan Knox is a villain in the first season of Supergirl.

He is portrayed by Scott Michael Campbell.

Knox blows up a building belonging to Maxwell Lord. Supergirl arrives to save civilians. Eventually, the DEO uses the facial recognition from the bombing to find out that Ethan Knox is the bomber. Knox, who has an ill daughter had been previously fired by Lord. Now knowing Knox' identity they deduce that he is targeting Lord to get revenge and will sabotage the launch of Maxwell Lord's super train the same night. However, a bomb is found at the airport and Kara flies to deactivate it. Once facial recognition locates Knox at the train launch, Kara decides mid-air to return to the super train and enters the driving train through the roof. In there, she tells Maxwell Lord to bring the civilians as far away from the bomb as possible while she uses her ray vision to locate Knox. While she approaches Knox, the DEO evacuates the airport and DEO director Henshaw remains in the building alone to defuse the bomb with his supernatural powers. Once the bomb is disarmed he returns to the civilians, claiming that it was only a decoy.

At the train, Kara locates Knox in the front and confronts him. Knox warns her that the bomb will be automatically triggered should he be removed from the train. Kara tries to talk him down, but Knox claims that there is no way out for him. Kara tells him that while she knows that Knox' daughter is sick, he has to search for hope. Knox claims that no one was supposed to know that he was the bomber and that he now can never face his daughter again, stating he did what he did for her. Kara begs him to not kill all the people on the train and Knox answers that he won't because Kara will save them. He tells her that she has thirty seconds, then uses the detonator. To save the people onboard, Kara shoots laser rays out of her eyes and severs the connection between Knox' compartment and the rest of the train. While she pushes from the front to slowly stop the train, the part of the train Knox is inside drives on and eventually explodes, killing him.

After Knox' death, Kara remains wondering how blowing up things would help Knox' daughter. She also thinks that Knox didn't seem mad but sad. Kara later finds out that Knox was hired by Lord to blow up the buildings and the train in exchange for life long medical treatment for his daughter. 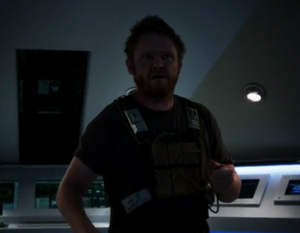 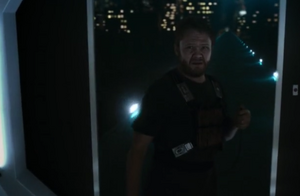