He was portrayed by the late Powers Boothe, who also played Joshua Foss in Sudden Death, Benjamin Travis in Hitman: Absolution, Gideon Malick in Marvel's Agents of S.H.I.E.L.D., Curly Bill Brocius in Tombstone, Roland Kane in Turok and Gorilla Grodd in the DC Animated Universe.

Roark is an extremely wealthy and corrupt politician, and the most powerful man in Sin City. He once murdered his own wife with a baseball bat but was never arrested for it, despite having left his fingerprints all over the crime scene and even full out confessing to it. Roark frequently uses his police connections to cover up the crimes committed by his son, Roark Jr. a sadistic child rapist and murderer whom Roark hopes will one day become President. Roark is also the younger brother of an even more powerful political figure, Cardinal Roark, who through his influence achieved his position.

Roark makes his first appearance in That Yellow Bastard. After an honest police detective named John Hartigan shoots and disfigures Roark Jr. after he kidnaps his latest victim, nine-year-old Nancy Callahan, Roark visits Hartigan in the hospital and plans to frame him for Jr.'s crimes. It is later revealed that he used his connections to replace Jr.'s balls, but had the side-effect of turning his skin yellow. After being released from prison, Hartigan rescues Nancy and brutally kills Jr., enraging Roark and prompting him to plot revenge. Fearing that Roark will go after Nancy, Hartigan commits suicide with his own gun, rendering Roark's vendetta useless.

Sin City: A Dame to Kill For

Roark returns in the 2014 sequel as one of the two main antagonists, alongside Ava Lord. He first appears in The Long Bad Night (Part I), where he is seen playing poker at the back of Kadie's place. A young gambler named Johnny arrives and hits the jackpot on several slot machines in order to buy his way into the poker game, accompanied by a young waitress named Marcie who he views as a good luck charm. Roark taunts Johnny throughout the game but Johnny soon cleans him out, angering the senator greatly. In response, he has Johnny escorted into his limousine by his henchmen after a night out with Marcie, and is severely beaten before having three of his fingers broken with a pair of pliers. Roark then takes back his money and reveals that he recognized Johnny immediately as his illegitimate son, but only ever considered Roark Jr. his own flesh and blood. Roark shoots Johnny in the leg before leaving, preferring to let him suffer instead of killing him. Johnny then swears vengeance on the corrupt senator.

In The Long Bad Night (Part II), Johnny goes to Marcie's apartment to check that she is safe. Instead, he finds Roark who reveals he has killed and dismembered Marcie, leaving Johnny griefstrickenn. However, Johnny soon returns to face Roark in another poker game, much to the senator's surprise. Johnny folds several times, allowing Roark to taunt him about his dead mother, in order to con him into going all in. Johnny then reveals his winning hand, smugly telling his father that for the rest of his life, he will be haunted by the knowledge that he was beaten by the same man twice. With his revenge completed, Johnny smirks as Roark shoots him in the head, before having his men dispose of the body.

Roark makes his final appearance in Nancy's Last Dance. Following John Hartigan's suicide, the distraught Nancy Callahan has become a heavy drinker and developed an obsession with killing Roark. Hartigan's ghost appears to her to try and convince her not to avenge him, as it will only lead to her own downfall, but Nancy still attempts to kill the senator during his first game of poker with Johnny. However, she finds that she cannot pull the trigger and later has a hallucination of Roark in her bedroom, who mocks and laughs at her, claiming she is weak.

Later, Nancy cuts her hair and slices her face with glass before requesting the help of her friend Marv to take down Roark. Marv, believing Roark was responsible for mutilating her, willingly obliges and the pair initiates an assault on Roark's heavily guarded compound. After massacring all of Roark's bodyguards, Marv is wounded and Nancy is forced to confront the senator alone. Roark gains the upper hand and shoots her, but before he gets the chance to kill her, a vision of Hartigan appears in a nearby mirror to distract him. An injured Nancy quickly recovers her gun and shoots Roark in the shoulder, then finally in the head. 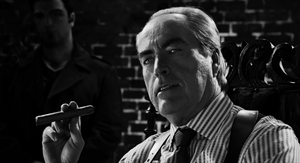 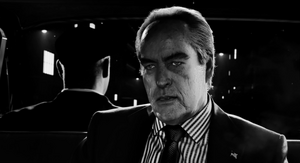 Roark watches Johnny being tortured in his limousine, in response for beating him at poker. 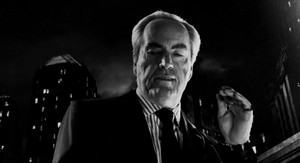 Roark reveals to Johnny that he is his illegitimate son. 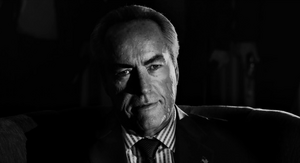 Roark mocks Johnny after killing and dismembering his friend Marcie. 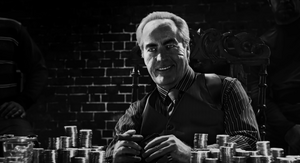 Roark during his second game of poker with Johnny. 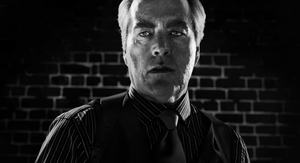 Roark is infuriated when Johnny beats him a second time, moments before killing him. 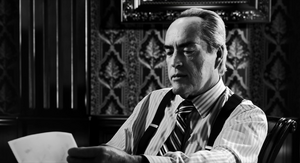 Roark learns that Nancy Callahan is plotting to kill him. 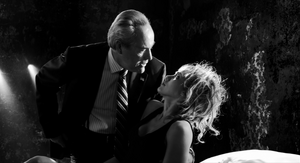 Nancy's hallucination of Roark during her sleep. 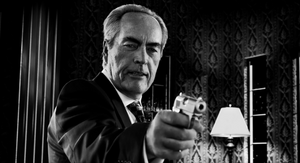 Roark preparing to kill Nancy following her infiltration of his compound. 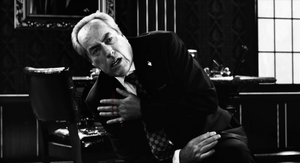 A wounded Roark about to be shot in the head by a vengeful Nancy.