Find a way to reanimate the dead.

Dr. Ethel Peabody, usually referred to as Ms. Peabody, is one of the two secondary antagonists (alongside Tabitha Galavan) of the second season of Gotham. She made her debut appearance in the eleventh episode, "Worse Than A Crime". She is portrayed by Tonya Pinkins.

Ms. Peabody is the personal assistant of Professor Strange at Arkham Asylum and also acts as a chief scientist in the underground research facility Indian Hill. Although Strange confides many of his plans to her, he keeps secrets from her. As most of the researchers at Indian Hill Peabody searches for a way to reanimate the dead. After the incident at Indian Hill, in which most of the experiments escape into Gotham, Peabody escapes conviction by testifying against Strange. She does, however, not escape Fish Mooney who captures her and has her killed by one of her henchmen.

Peabody is first seen when Theo Galavan's corpse is delivered to Indian Hill. When she uncover the corpse, it is revealed that Penguin jammed his umbrella down Galavan's throat. Peabody tells the men who delivered the body that Strange has particularly high hopes for this one.

Although he at first managed to escape custody Cobblepot is eventually caught by the GCPD and, pledging insanity, is confined to Arkham Asylum. After meeting with Cobblepot to get to know him, Strange enters a secret elevator which takes him down to Indian Hill. There, he is greeted by Peabody who gives him the newest updates, revealing that one of their test subjects refuses to cooperate with their experiments and that for the third time she was forced to reschedule Strange's appointment with a Gotham City Councilman. She also hands Strange a newspaper article about Mr. Freeze, telling Strange that someone found a way to post-cryonic reanimation. Although Strange at first doesn't believe it, he then reads the article and is baffled about Freeze's cryonic knowledge. Stating that this could mean great progress for their program, Strange asks who the man is and Peabody reveals Fries' name.

When the GCPD plans to set a trap for Fries at Arkham Asylum, intending to put Nora into Arkham's medical wing, Strange uses the opportunity. When Leslie Thomkins, acting as Nora's doctor, arrives with Nora Peabody brings both of them into the medical wing. Leslie is shocked to see the comatose Barbara Kean, an old rival of hers, lying on the bed next to Nora. However, Peabody reveals that she thinks of Barbara as a sleeping angel and asks whether Leslie knows her. Leslie denies it. Whether Peabody arranged this meeting of sorts intentionally is unknown.

After Fries enters Arkham Asylum, Strange traps the cops behind a security door, claiming that there is a malfunction. He then contacts Fries via loudspeaker and him to leave a vial of his cyonic formula behind in exchange for safe passage out of the Asylum together with Nora. Fries agrees and Strange sends Peabody to fetch the formula.

Strange then orders her to supervise the rehabilitation process of Cobblepot as healing a man like Oswald would mean great publicity. Peabody uses a neural headset using the fear formula from Gerald Crane on Cobblepot, causing him great pain and causing him to hallucinate vividly. Initially defiant and insulting, Cobblepot eventually develops a fear for Ms. Peabody during his "therapy sessions." However, the process turns Cobblebot more and more docile. After performing many tests to ensure that Oswald is healed, Strange proclaims Cobblepot sane and releases him from the Asylum.

Watching Cobblepot leaving Arkham Asylum, Peabody asks Strange whether he is sure about Cobblepot's rehabilitation. Strange tells her that he doesn't really think so and that Cobblepot's release is merely an experiment. When Peabody continues to ask, Strange reveals that he has deeper plans for Cobblepot that he can't share with Peabody for her own safety. Peabody coldly states that the plans can't be more secret than the laboratory in the basement (where semi-human creatures are being grown) and tells him that whatever he plans for Cobblepot will be on his head.

After her awakening, she is brought into with other prisoners, supervised by Professor Strange. Strange listens to Barbara confessing the murders of her parents and the attempted murder of Leslie and Jim. She claims that she doesn't feel insane but only sad and seems completely docile. After all prisoners are gone, Peabody approaches Stange. Although Peabody thinks that Barbara is only putting up an act, Strange is less convinced about it. Strange later convinces Barbara that she is sane and releases her into the city, another one of his pawns. Watching Keane drive off, Strange is told by Peabody that his reputation will suffer should he continue release lunatics from the asylum. Strange claims that he is not interested in his reputation and that while he does not know what Barbara will do, the results will surely be interesting.

After the incident at Indian Hill, Peabody is arrested. As she agrees to testify against Strange, she is not imprisoned but put under witness protection. Six months later, she is visited by Gordon who tells her that Fish seems to be sick from the treatment she was put under at Indian Hill and that she surely will come for Peabody. Peabody is confident that no one can find her, but Gordon reveals that he is aware that he was used by Fish so that she could follow him to wherever Peabody is hidden. When they hear noises outside, Peabody is shocked that Gordon used her for bait. Indeed, the room is soon stormed by three of Fish Mooney's experiments and Gordon is swiftly overpowered. Peabody is dragged out of the room screaming for help.

Peabody is brought before Fish in an abandoned warehouse, they are surrounded by some of Fish's henchmen. Peabody reveals that she knows why Fish brought her, her body is beginning to reject the changes the people at Indian Hill made in her DNA. Fish wants to know how to fix it and Peabody tells her that she merely has to stop using her new powers. Fish however wants to keep her powers and Peabody tells her that she cannot reorder her DNA. Fish then grabs Peabody's arm, uses her powers and tells her to find a way. Under Fish's influence, Peabody tells Fish that Strange is the only one who can fix her. Fish claims that Strange will fix her and that he also will provide her with an army of people with abilities just like hers. Fish then introduces Peabody to Marv, one of the experiments in Indian Hill. Marv was created by Peabody herself. On Fish's orders Marv then uses his powers on Peabody and ages her to death. Peabody's corpse is eventually found by the police and brought to the GCPD morgue. Lucius Fox and Gordon deduce, that Peabody's death means that Peabody was not able to cure Fish and that she is searching for Strange. 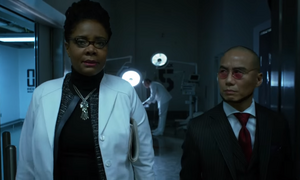 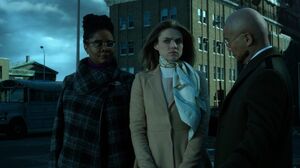 Peabody and Strange are freeing Barbara Kean from Arkham.
Add a photo to this gallery 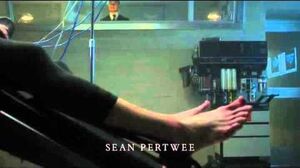 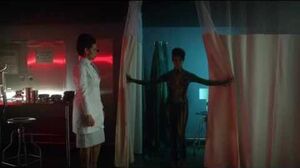 Retrieved from "https://villains.fandom.com/wiki/Ethel_Peabody?oldid=3404436"
Community content is available under CC-BY-SA unless otherwise noted.