Etherious (in Japanese: ゼレフ書の悪魔, エーテリアス, Ēteriasu) are a race of Demons that were born from the Books of Zeref. They are made completely of Ethernano, with the exception of E.N.D. and were thus dubbed by Zeref as the "Etherious". They serves as the main antagonists in the manga/anime Fairy Tail, especially the Tartaros Arc. This race consists of about 17 Demons.

Etherious is the given name to the subspecies of the Demon race that were created from the books made by the Dark Mage Zeref. They were originally created for the purpose of killing Zeref, but because none of them were strong enough to do so, they abandoned that goal and continued on with their own ambitions. Nonetheless, they retain their loyalty towards their creator, as well as the strongest among them, E.N.D..

Unlike the Demons that inhabit Galuna Island, not all Etherious possess wings and they do not all possess Human forms. Also, in stark contrast to the rest of the living organisms capable of doing so, Etherious, or at least Tartaros Etherious in particular, do not make use of Magic, but rather Curses, which accordingly run off of Curse Power (in Japanese: 呪力, Juryoku).

Also, various members of the Etherious subspecies have displayed the ability to enter a so-called Etherious Form (in Japanese, エーテリアス フォーム, Ēteriasu Fōmu), in which their appearances change and they gain access to an enhanced set of their already available abilities, something which is dubbed as utilizing the "real power" of the race. However, the member of said race Seilah cannot freely enter the form like other members, but instead must turn her own Macro Curse upon herself to remove her own personal "limiters"; meanwhile, member Ezel is the only Etherious to give his form a specific name: "Slash Attack Mode" (in Japanese: 斬撃モード, Zangeki Mōdo).

At any given time, the Etherious can also be transformed back into their book form by their creator Zeref, and will all cease to exist if he dies. 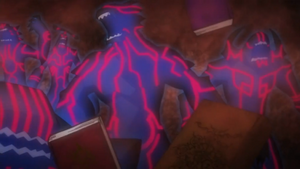 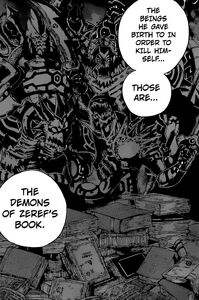 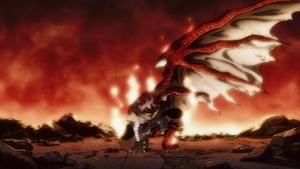