Eudial, better known as Eugeal in the CWi English dub, is the leader of the Witches 5 who work for Doctor Tomoe. She takes over for Kaorinite after she is killed (but is later brought back to life).

Eugeal would always take the Daimons created by Tomoe in a box, and drive around in a car with the box, and then extract her target's Pure Heart by shooting them with a heart snatching gun. Whenever the Sailor Scouts came to stop her, she would send the Daimon after them, but her plans would always be foiled.

Eventually she discovered that Sailor Uranus and Sailor Neptune possessed two of the three Pure Hearts they needed, so she extracted Sailor Neptune's Pure Heart before being knocked over the edge by Usagi Tsukino. Sailor Uranus extracted her own Pure Heart to save the world, and Sailor Pluto returned the Pure Hearts to them while separating them from the saber and mirror they turned into. The crystal on her staff was the third Pure Heart, and with them brought together, the Purity Chalice appeared. Eudial and Sailor Moon raced to get it, but in the end, Sailor Moon got it and transformed into Super Sailor Moon and easily defeated Eugeal. Eugeal drove away in her car, but discovered too late that Mimet put acid snails inside it, corroding the brakes and causing her to crash over the edge of a cliff and into the sea, killing her.

Though not the strongest of the five witches, Eugeal was their chief due to her high intelligence. She built her own weapons along with many other devices for the Witches and Doctor Tomoe, and was eventually able to discern that the talismans that they sought from Pure Hearts belonged to the very same people who were hunting them: Sailor Uranus and Sailor Neptune.

In the anime and musicals, Eugeal's weapon was a flamethrower called the Fire Buster. It was powerful enough to deflect Sailor Moon's Moon Spiral Heart Attack, but was rendered useless after Sailor Venus used her Venus Love-Me Chain to puncture the device.

In her final clash against the Sailor Senshi, she used an upgraded model called the Fire Buster II. It was at least as powerful as the other version, and even came with a glue-gun attachment that was used to trap the other Sailor Senshi. However, it was overpowered after Sailor Moon obtained the Holy Grail and transformed into Super Sailor Moon. Although the Materials Collection stated that her death attack was Fire Buster, she never had the chance to use it in the manga. 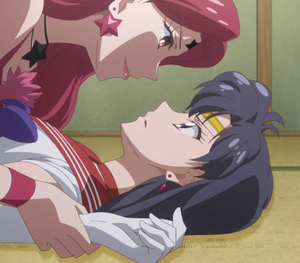