Help Francis E. Francis take down BabyCorp by selling the Forever Puppies to get more attention than babies (failed).

Eugene Francis is the secondary antagonist of DreamWorks' thirty-fourth animated feature film The Boss Baby, which is based on the 2010 book of the same name by Marla Frazee. He is the older brother and former right-hand man of Francis E. Francis (the CEO of Puppy Co.).

He was voiced by Conrad Vernon, who also played Rumpelstiltskin in DreamWorks' Shrek Forever After, and Cizer in Bad Cat.

Eugene is initially thought to be a dimwitted person as compared to his younger brother who orders him around. However, he is shown to be quite clever and tough just like his brother as he helped pull out a trap on Tim Templeton and the Boss Baby and disguised himself as a babysitter to fool the Templetons into putting the two boys under his care.

Eugene was a member of the Francis family when they decided to adopt the infant Francis. However, Francis grew bitter towards Baby Corp for his dismissal and vowed revenge.

Growing up, Francis founded Puppy Co. as a rival to Baby Corp and gave Eugene a job serving as his main lackey, becoming very popular to the public. Despite taking delight in aiding in his younger brother's schemes, Eugene finds it disapproving that he is being treated as a lackey as opposed to being a brother by Francis, as the latter would often order him around and sometimes uses him as a chair.

Eugene first appeared when Tim Templeton and the Boss Baby broke into the Puppy Co. offices to search for a file containing plans of a "Forever Puppy". However, they soon learn it was a trick, as Eugene (posing as an actor wearing a puppy suit named Puppy Co. Pete) traps them in Francis' office, where Francis steals a secret formula from the Boss Baby, revealing his true plan to use the formula to create the "Forever Puppies" and sell them to become more popular than babies and put an end to Baby Corp.

With the secret formula at hand, Francis decides to head over to Las Vegas to oversee his operations and take Tim's parents along under the guise of a business trip. Francis then gets Eugene to pose himself as a female babysitter named Mr. Lady Man to keep an eye on them in their house in order to ensure that Tim and the Boss Baby will not interfere, but Tim and Boss Baby escape from Eugene with the help of Jimbo, Staci, and The Triplets. However, as the duo finally board a plane with Elvis impersonators, Eugene is revealed to have boarded with them, disguised as an Elvis impersonator himself.

Eugene then follows the duo to the Puppy Co. convention, where he accidentally calls up to Francis, who (along with Tim's parents) spot Tim and the Boss Baby among the audience. Locking up Tim's parents in a giant heartbox, Francis orders Eugene to get rid of the kids. However, they manage to outwit Eugene by going through play tubes to dispose of him into a kitten play box.

Following the defeat of Francis (who has been turned back into a baby after falling into the secret formula pit), he attempted to attack both Tim and the Boss Baby for ruining his evil plans. However, Eugene then stopped him, and redeems himself by putting a pacifier in Francis' mouth and puts him to sleep. Eugene then informs the duo that he will try to raise Francis properly as a baby without an evil heart and walks away with Francis in his hands. 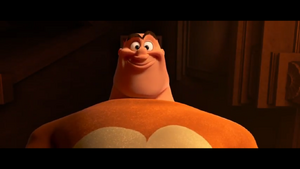 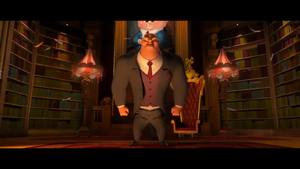 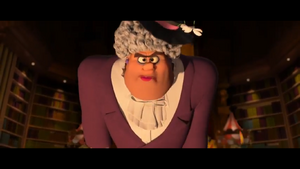 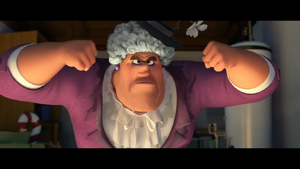 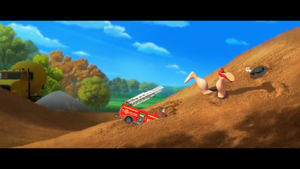 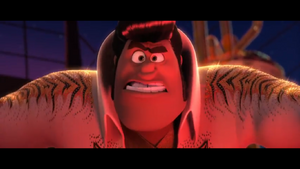 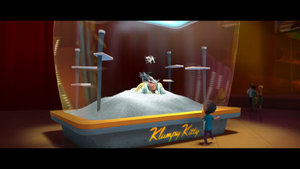 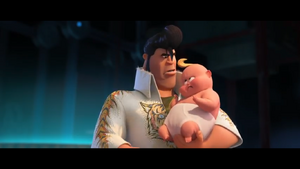 Eugene about to put the pacifier in Francis' mouth. 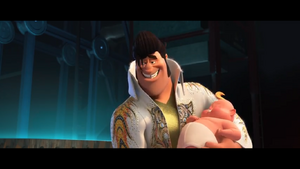