Killing people and eating their livers.

Eugene Victor Tooms, often referred to simply as Tooms, is a villain from The X-Files who starred in two episodes - "Squeeze" and "Tooms" - making him one of the few antagonists outside the Conspiracy to make an appearance more than once. He is a cannibalistic serial killer who eats his victims' livers to extend his lifespan far beyond its natural limits.

He is portrayed by Doug Hutchison, who also portrayed Percy Wetmore in The Green Mile, and Pete Willard in A Time To Kill.

A strange creature of unknown origins, Tooms can contort his body in ways no living human could achieve without injury or death. He also undergoes a hibernation process lasting 30 years in order to survive.

Tooms first known murder occurred in 1903 and would continue on 1933 and 1963 - this would have made Tooms at least 100 years of age by the time Agent Mulder and Scully tracked him down, though he physically resembled a fairly young man: strongly suggesting his hibernation also somehow regresses his aging process.

His inhuman nature was revealed more in "Tooms" when Mulder tracked him into a mall and into a nest resembling that of a wasp or spider located under an escalator. Tooms attacked Mulder for this trespass but was killed in the ensuing confrontation after Mulder activated the escalator, trapping Tooms in the mechanism. 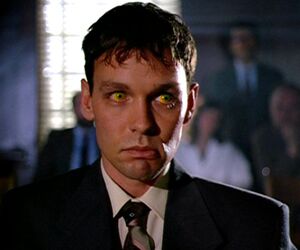 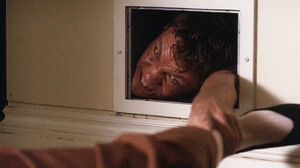 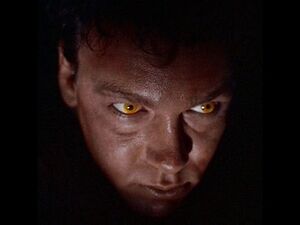 Retrieved from "https://villains.fandom.com/wiki/Eugene_Tooms?oldid=4039359"
Community content is available under CC-BY-SA unless otherwise noted.