Eulogy Jones is one of the more prominent side villains in the game Fallout 3.

He leads the Slavers, a prominent villainous faction who specializes in profiting off of the buying and selling of forced human labor.

He was voiced by James Lewis.

Eulogy accomplishes his goal mainly by having his targets mesmerized with a special brain wave scrambling ray and then fitting them with a specialized collar which will explode, decapitating its wearer, if they get out of range or disobey commands. Eulogy is generally feared by his employees, and has little patience for failure or contradiction.

Eulogy is both a slaver and a pimp. His two bodyguards, Crimson and Clover, double as prostitutes for him, and through dialogue it is revealed that they are brainwashed as well. Eulogy abuses Crimson and Clover psychologically, and most likely physically as well, focusing most of his rage on Crimson because her brainwashing did not take as well as Clover's did.

Eulogy does not have any scruples with regards to who he will enslave, and he may commission the player to enslave both adults and children. There is no official quest in the game to kill Eulogy, and fighting him will prompt all the other slavers in Paradise Falls, as well as Crimson and Clover, to attack you, not to mention that he is quite strong on his own.

It is possible however, to kill all of the slavers, but there is no in game reward outside of being able to loot their hideout and free some of the slaves, Clover and Crimson excluded.

Eulogy Jones as he appears in Fallout Shelter. 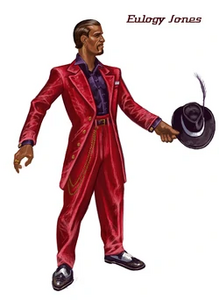 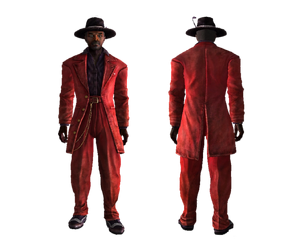 Eulogy Jones' full outfit, including his hat which he never wears in-game.