Euryale (Greek: Εὐρυάλη, English translation: "far-roaming"), in Greek mythology, was the second eldest one of the 3 Gorgons, three vicious sisters with brass hands, sharp fangs, and hair of living, venomous snakes. She, like her sisters, was able to turn any creature to stone with her gaze. She and her sister Stheno were both immortal, but Medusa, the last of the sisters, was mortal.

They were daughters of primordial sea god and goddess Phorcys and Ceto, who personified the dangers of the sea. In many stories, Euryale is noted for her bellowing cries, particularly in the tale of Medusa's death at Perseus' hands.

Another Euryale, daughter of King Minos of Crete, was the mother of Orion, in Hesiod and other sources; there are other stories of his birth as well. 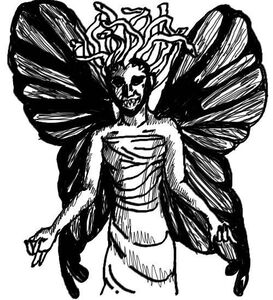 Add a photo to this gallery
Retrieved from "https://villains.fandom.com/wiki/Euryale_(mythology)?oldid=4335737"
Community content is available under CC-BY-SA unless otherwise noted.