Eustace Bagge is the tritagonist and the main antagonist of Courage the Cowardly Dog. He is Muriel's cranky husband and one of Courage's two owners. He is also the latter's most hated enemy.

Eustace has several antagonistic roles throughout the series, one of the most notable is in the episode "Ball of Revenge", where he gathers and meets up with the villains that Courage had previously encountered and either outwitted or defeated to get rid of him by challenging him to a game of dodgeball. Even to the point of getting Courage killed much to his jealousy of attention gathered by Muriel over himself.

Eustace was born on an unknown date in a trailer park. He was not well-liked by his mother and he was shown to be a friendlier person than in his later years. He had a brother and father who are implied to be bigger and much more muscular than Eustace. It is implied that his family all wear glasses for unknown reasons (possibly a poor vision trait) and that he was bald since he was a child. Because of the abuse he got at the hands of his family, he become bitter and hateful.

Role in Courage the Cowardly DogEdit

Muriel found Courage as a puppy outside the veterinarian office where his parents were launched into space by the vet for his secret experiment on sending dogs to space (which in the "Remembrance of Courage Past" episode, later failed as they were revealed to be alive, mauling him in the end). Later on, Eustace began to hate Courage as he received more attention from Muriel than Eustace himself.

Eustace is a malicious, ill-tempered, cruel, heartless, egotistical and nasty old farmer who is married to the kindhearted and gentle Muriel despite being her polar opposite.

Throughout the series, Eustace is very ornery, combative, and antagonistic to Courage the Cowardly Dog, having a grudge against Courage, and is basically a cantankerous and argumentative bully who constantly calls Courage a stupid dog, mistreats him, and loves to scare him. Often, his cruelty earns him a bop on the head by Muriel, often followed by him asking "What did I do?". Eustace is also regularly maimed or tortured by the many ghosts and ghouls that haunt Courage.

Eustace got disgusted of his nephew by marriage, Freaky Fred as he called him a "freak". He knowledge of Fred as a barber, "A freaky barber, with his own freaky barber shop, where freaky things happen, freaky barber things".

Although almost always an antagonist, Eustace has occasionally worked with Courage to try and overcome some particularly nasty villains. For example, in "Katz Kandy," when Muriel is kidnapped by a candy creation of Katz's and Courage is defeated by him in a staring contest and turned into candy for his loss, it is Eustace who surprisingly saves the day by defeating Katz and throwing him into his own candy-making machine (after Katz tries to do the same to him first). Neverthless, these alliances are usually temporary. More often than not, Eustace is a very stubborn and even devious individual. However, it's implied that even Eustace knows there are certain boundaries that he shouldn't cross. When the Cruel Veterinarian made clear his intentions to send Courage to space in a rocket, Eustace fiercely disagrees with him, which means that Eustace may be cruel, but has limits.

As well as his bullying, Eustace has long been established as a very acquisitive and greedy individual who has brought disaster upon himself and others in his stubborn pursuit of riches, showing no sympathy and hestiation to those around him (that he often doesn't deserve). One of the more famous examples of this was Eustace's refusal to give up King Ramses's slab after Eustace finds out its potentially worth a fortune; despite that Ramses continually demands they return the slab between unleashing horrible plagues in warning.

A disturbing fact about Eustace's early life, according to John R. Dilworth, is that back when Eustace and Muriel were young, Muriel was interested in another man, but through some unknown dark deed, Eustace managed to win her love, but what exactly Eustace did to his love rival to get rid of him is beyond anyone's guess. However, on a positive side, this possibly means that deep inside his heart, Eustace really loves Muriel and during their youth was willing to do whatever he needed to win her affection. Neverthless, his doesn't prevents Eustace from risking Muriel's life sometimes albeit unknowingly, like when he reunited most of Courage's enemies and didn't do anything when they tried to cook Muriel alive (yet Eustace could have possibly thought they weren't going to kill her or he had asked them offscreen to not kill his wife).

Eustace is a tall and thin elderly man with enormous feet (though these pale in comparison to his father's) who walks in a crouch, compared to Muriel, who is short and overweight. He's bald and has squinty little eyes. His arms are spindly, but his hands are large. He has an enormous underbite and false teeth. He wears green overall-like trousers and a short-sleeved yellow shirt along with jam-jar glasses, a brown hat and brown shoes. His usual facial expression is extremely grouchy. 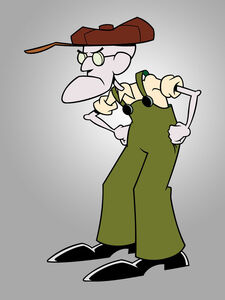 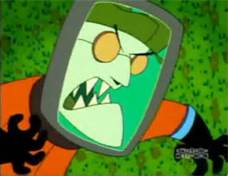 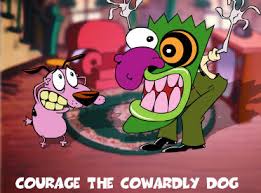 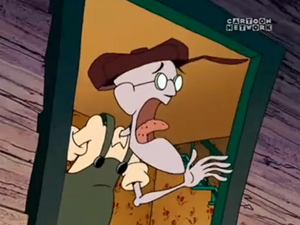 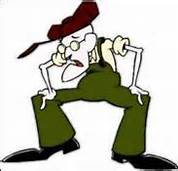 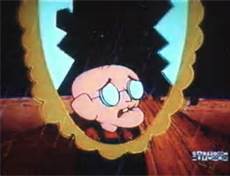 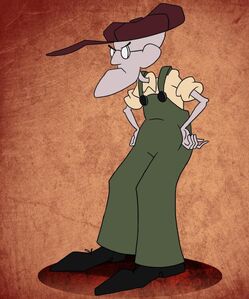 Retrieved from "https://villains.fandom.com/wiki/Eustace_Bagge?oldid=3842199"
Community content is available under CC-BY-SA unless otherwise noted.