Seek revenge against Frank West for the death of his brother Adam the Clown (failed).

Evan MacIntyre known as Ice Cream Clown, or Evan the Clown or Stlits the Clown is one of the bosses or psychopaths in the video game Dead Rising 2: Off The Record, a remake of 2010's Dead Rising 2. He is also an optional boss in the main mode 72 Hours, who you can meet for the first time on the 3rd day at 7 p.m. on the Platinum Strip, right before the entrance to the Fortune City Arena in the side quest Snow Job. He is a clown and ice cream vendor who works in Fortune City, and the younger brother of Adam MacIntyre. When Adam died as a result of a zombie outbreak back in Willamette, and according to witnesses, Adam fought a man with a camera just before his death. Evan believed that it was reporter Frank West who murdered his brother and vowed to take revenge on Frank, an opportunity that arises during the Fortune City outbreak.

He is voiced by Gabe Khouth.

Evan MacIntyre learned after the Willamette incident that his brother had died. However, he additionally learned from witnesses that before his death, Adam had fought with a man with a camera - that is, the hero from Willamette: Frank West. Evan vowed to avenge Adam's death under fairly favorable conditions.

At 7:00 p.m. on September 27, Stacey calls Frank telling him that she has noticed some tall man walking on the Platinum Strip outside the Arena shouting at zombies. Frank West heads to the Platinum Strip and begins to walk along it. Right behind him is Evan, walking on stilts, shouting in all directions that he is inviting everyone to taste delicious ice cream. Evan doesn't seem to care about the whole zombie outbreak and keeps his sense of humor. Frank, visibly disgusted by the sight of Evan, tells himself that he hates clowns, which is an allusion to his meeting with Adam at Willamette. Evan approaches Frank and greets him to which Frank immediately tells him that he must go ignoring Evan. Evan didn't seem to recognize Frank so he thought Frank was a regular customer and decided to offer him some ice cream to try to cheer him up. Frank, however, refused to be persuaded and tells him that he will definitely not take anything from him. At this point, a photo of Frank with his signature flies over Evan's face, flown from the hands of Frank's dead fan. Evan examines the photo and realizes he is talking to his brother Adam's killer. Evan begins to ask Frank if he knows his late brother who worked at the Willamette mall, adding that several witnesses saw him fight a man with a camera. Frank tells Evan that if Adam was his brother, he wouldn't want to meet his sister. Furious, Evan pulls a snowball cannon from behind his back and decides to kill Frank in order to avenge his brother's death.

After a long battle with Frank and taking a large amount of damage, Evan begins to wobble on his stilts before falling off them and losing consciousness. It turns out that Evan is a dwarf, and Frank comments on his height with a nasty tweak, then leaves. However, Evan quickly wakes up and runs over to Frank, telling him that it's not over yet and is ready to give him all his flavors to try.

After the fight, the defeated Evan staggers towards his clown car. The clown falls to the ground and raises his snowball cannon. Dissatisfied with being broken, Evan starts jumping up and down to pick up some liquid nitrogen bombs on top of the car. However, his bouncing sets the car in motion, causing one of the bombs to fall off the car and explode right in front of him. After the bomb goes off, Evan begins to freeze to death. The clown starts walking towards Frank and dies, being completely frozen, telling him before dying that there's nothing like ice cream to cool down. Frank walks over to the frozen clown and knocks him over, causing his body to break into hundreds of pieces. Frank leaves and adds that Evan's demeanor cracked him up. 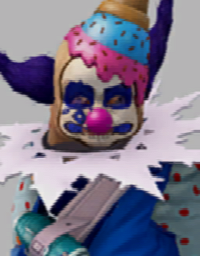 Photo of Evan in Frank's Notebook. 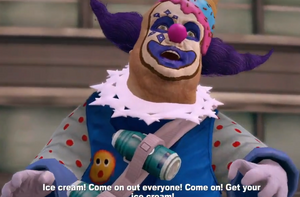 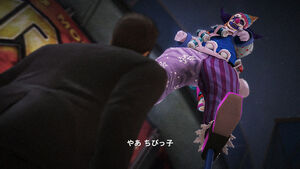 Evan looking at Frank from above. 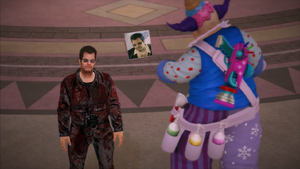 Photo of Frank flying in front of Evan's face. 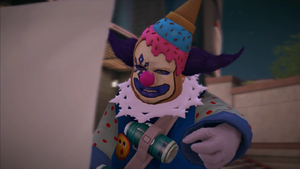 Evan looking at a photo. 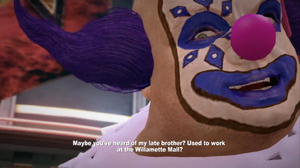 Evan asking Frank if he knew his brother Adam. 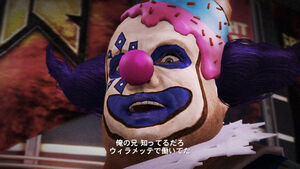 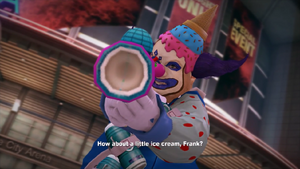 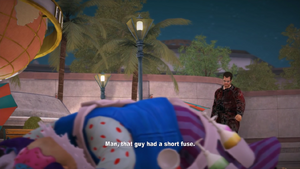 Evan lying on the ground after turning out to be a dwarf. 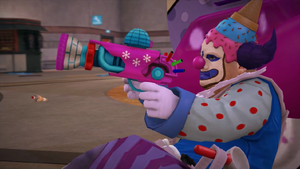 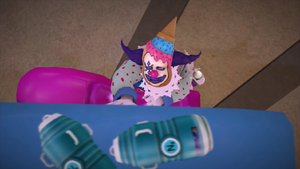 Evan trying to get to his liquid nitrogen bombs. 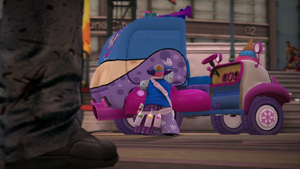 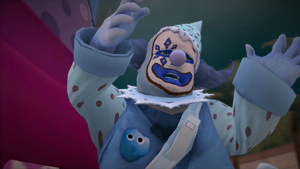 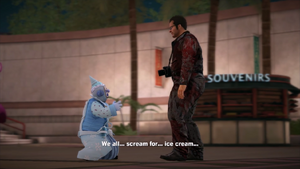 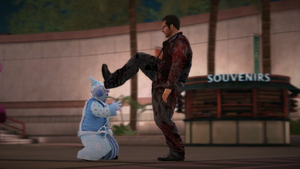 Frank about to knock frozen Evan over. 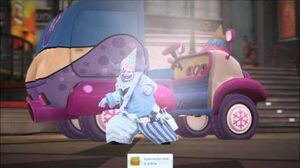