Wicked Witch of the East

Oz: the Great and Powerful

Take over the Land of Oz.

Kill Oz and Glinda with the help of her sister Theodora (both failed).

Evanora, also known as the Wicked Witch of the East, is the main antagonist in the 2013 Disney film Oz: The Great and Powerful. A witch to be feared, Evanora is Theodora's sister. With her penetrating gaze, she exudes a powerful presence and has positioned herself as the royal adviser and protector of the Emerald City. Being a Wicked Witch, she has a hideous form which she hides by wearing a necklace that gives her the appearance of a stunning young woman.

She was portrayed by Rachel Weisz in her first villainous role.

Evanora first appears guarding the throne when her sister Theodora introduces Oscar Diggs, the fabled "wizard" to the throne room that previously belonged to her father and the king, who was supposedly murdered by the wicked witch Glinda. She appears gracious that the wizard has returned to help them stop the Wicked Witch's reign of terror, then asks him to join her later on to learn about him.

As Oscar leaves the room, Evanora scolds her sister for bringing an impostor to the Emerald City. Theodora tries to defend, believing that Oscar is really the wizard who will save them. In her anger, she accidentally sets off her own magic to a nearby torch. To this, Evanora slyly asks Theodora if this is really what she wants, or if she is just as wicked as the witch as to wanting to aid her. She then accompanies Oscar to "test" if he is truly the wizard, to which Oscar claims to be true. Knowing his lie, she shows him the treasury, immediately enticing Oscar. However, she tells Oscar that the only way to receive these riches is to kill the Wicked Witch of the East, and the only way is to break her wand, only then will he become the king. Seeing no other option, Oscar sets out to stop her.

In truth, Evanora was the real Wicked Witch of the East and the real murderer of the former king. Years ago, she sought to rule Oz by herself and killed the King by poisoning him with a powerful and unknown poison, so she could rule uncontested. When rumors swelled that the Wizard of Oz would return and take his place as King, Evanora vowed to never let that happen. Her real motive was to send Oscar to kill the sister who opposed her, Glinda, the Good Witch of the South and the real daughter of the king, to crush her resistance and then kill Oscar herself so that she could rule Oz forever.

However, Glinda reveals the truth to Oscar before he is about to kill her while Evanora watches in anger through her crystal ball as her plans to kill Glinda has failed. As she watches, Theodora comes into the room and sees her sister spying on Oscar, she questions what happened when Evanora was with Oscar. Seeing Theodora's potential for evil, Evanora lies to her claiming that Oscar seduced her that night and promised to make her queen after he kills the Wicked Witch. Hearing this, Theodora cannot believe it, but Evanora uses the exact words Oscar said to Theodora to make her claim seem legitimate. Evanora then sends out her army of Winged Baboons to stop and kill Oz and Glinda.

As the two sisters continued to watch Oscar's journey, Theodora became heartbroken at Oscar's betrayal as he joins forces with Glinda. Playing on her sister's lust for revenge, Evanora offers her a green apple that will give her the strength to beat him. Theodora immediately takes a bite from it, but afterwards she realizes that Evanora was the Wicked Witch all along, however she is too late to realize this as Theodora begins to transform into a hideous, much more wicked, green-skinned version of herself.

Pleased, but in shock of her sister's new appearance, Evanora tells her she can cast an illusion enchantment to hide her appearance, but Theodora angrily yells no as she embraces this new form as the Wicked Witch of the West. With war approaching from Glinda's resistance, Evanora along with the Witch of the West prepare their army against the coming invasion. Announcing that they will drive away the enemy, Evanora is suddenly interrupted by the Witch of the West stating there will be no mercy, only complete slaughter, as she demonstrates her much more cruel change to a surprised Evanora.

When the resistance finally attacks, Evanora and the Witch of the West watch invaders coming through the Poppy Fields covered with a mist conjured up by Glinda. Evanora calls out for the winged baboons to attack, but realizes too late that it is a trap composed of false scarecrow soldiers that puts most of the baboons to sleep, despite attempts to escape. However, two baboons manage to avoid this and capture the nearby Glinda, bringing her to Evanora. With civilians watching in Emerald City's square, she taunts the chained Glinda of her failure to bring a wizard to save the people of Oz, and tortures her with her magic.

Just then, the Witch of the West arrives and announces the cowardice and betrayal of the Wizard, showing the hot air balloon flying nearby. She shoots it down, causing it to ignite on fire and pour down gold stolen from the treasury. The people become discouraged, but Evanora smiles upon this and continues to torment Glinda over the Wizard's abandonment. As she and the Witch of the West are about to finish Glinda, an illusion cast from a carriage appears as Oscar's head.

Thinking this to be impossible, the Witch of the West tries to shoot fireballs at his head, only to have no effect. In response, Oscar sets off multiple effects to scare the witches and believe his power such as fireworks and explosions. Seeing the Wizard's might and uprising from the citizens, Evanora retreats to a passageway hidden in one of the columns, attempting to escape the city. However, she is confronted by Glinda in the throne room, wishing to end her reign of terror and put her father to rest once and for all.

A battle ensues between the two, and when it appears Evanora gains the upper hand, a blast sends the two witches flying back against the walls. Evanora, in a weakened state, tries to kill Glinda with her magic, but realizes her magic pendant is gone, Glinda having accidentally broken it, thus depriving her of her magic. Horrified, Evanora falls to the ground, and tries to crawl away. As she struggles, her true form is revealed to be an old, wrinkled and decrepit hag with yellow skin, long grey hair with long, sharp black fingernails and razor sharp teeth.

In anger of her fall, Evanora attempts to lunge at Glinda as a final attack, but she is blasted back by Glinda's magic and crashes out of the window. However, she is saved by her Winged Baboons and swears revenge against Glinda and Oscar. Her Winged Baboons carry her off as Glinda banishes her from the kingdom forever. 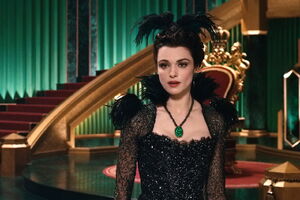 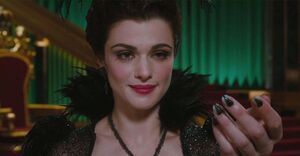 Evanora inviting Oz to know the Palace and her happy grin. 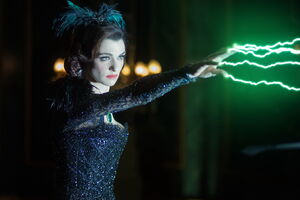 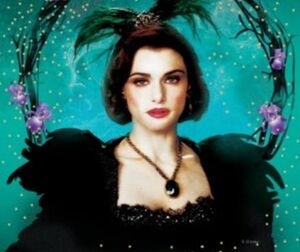 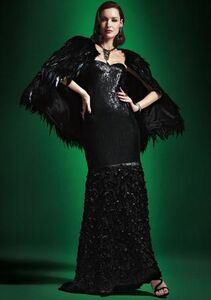