Kill Ruvé Darhk out of revenge for her husband murdering her parents (succeeded).

Expose the Green Arrow for a fraud and destroy his legacy before making him suffer and killing him (failed).

Evelyn Sharp is a recurring character in the CW TV series, Arrow. She appeared as a minor anti-hero in the Season 4 and later as one of the secondary antagonists in Season 5.

Initially, she appeared by stealing the Black Canary's identity in order to kill Darhk's wife, Ruvé, to avenge her parents' deaths. Later, she was recruited into the new Team Arrow before defecting to joining Prometheus and his campaign after learning about Oliver Queen's earlier time as "the Hood".

She is portrayed by Madison McLaughlin.

Her parents became willing followers of Damien Darhk and H.I.V.E. but were killed, either in Damien Darhk's gas chamber or later when the building was destroyed by Team Arrow. After finding out about the fate of her parents, Evelyn decided to avenge them. Aware that she was unable to defeat Darhk on her own, she targeted his wife Ruvé instead. Evelyn also snuck into the hospital where the wounded Laurel Lance was being treated and stole her Canary Cry collar.

After fashioning herself a suit similar to that of the Black Canary, Evelyn starts going after Ruvé. She attacks a gun ring to steal their weaponry and later attacks Ruvé's assistant Alex Davis in a restaurant, intending to murder him because of his affiliation with Ruvé. However, as Alex' girlfriend Thea Queen is a member of Team Arrow, Thea manages to stop Evelyn from executing Alex. Evelyn attempts to flee but is pursued by the Green Arrow who eventually corners her. During the confrontation Evelyn bitterly blames Oliver for her parent's death, as he did not save them, and then uses the Canary Cry collar to stun him and escapes.

During a gala Ruvé is hosting in her role of mayoral candidate, Evelyn attempts to murder her. Fighting her way through Ruvé's bodyguards, who Evelyn murders, the young woman is eventually confronted by the Green Arrow once more. Although Oliver attempts to talk Evelyn out of murdering her target, she shoots him with a gun to prevent him from stopping her. She then goes after Ruvé and holds her at gunpoint but when Oliver reminds her how the real Black Canary was a hero, Evelyn decides to honor her memory and spares Ruvé. Evelyn escapes before the police arrives but later attends Laurel Lance's funeral.

When Oliver decides to form a new team, Evelyn is one of the people he approaches. Evelyn agrees to become an apprentice of Oliver and later arrives at the meeting point, an old H.I.V.E. base at Star City. There, Oliver introduces her to the other recruits, Curtis Holt and Rene "Wild Dog" Ramirez. Oliver starts training them, ordering them to get past him to ring a bell. However, none of them succeeds and they are brutally beaten up by Oliver once they attempt to. Eventually, all three of the recruits get fed up with Oliver's brutal training methods.

The new team, including Artemis, is later called on by Oliver and is tasked to be present during a charitable gala hosted by AmerTek. During the charity, AmerTek CEO Janet Carroll is targeted by an assailant. Although the team is able to stop Ragman from murdering Carrol, he escapes due to Ramirez' impulsive actions. When Oliver later scolds the team for their insubordination, Evelyn, Rene and Curtis leave the team. Realizing that his training methods might have been wrong, Oliver later calls the three back. Realizing that they need trust to form a working relationship, Oliver reveals his identity to the recruits who join Team Arrow once more. Evelyn also gets the alias Artemis.

A week later, Felicity Smoak shows the recruits through the city's surveillance system how Oliver hunts down criminals. One of these criminals is a drug dealer whom Oliver interrogates to get the name and location of his supplier. Hearing the name and the location of the man, Wild Dog, who is fed up with not doing any crime fighting, decides to go after him. He convinces Evelyn to come with him, although she assumes that it is merely a recon job. The two arrive at the facility, where Derek Sampson and his men are producing the drug Star Dust. Inside the compound, Wild Dog's recklessness makes Sampson aware of the intruders, Evelyn and Wild Dog are forced to fight Sampson, who falls to his death into a vat of chemicals. However, Sampson resurrects hours later and has gained the power to be immune to pain. Oliver brings in the entire Team Arrow to hunt him down and defeat him for good. After they succeed, Oliver decides that it is time that his recruits enter the Arrow Cave. He leads them inside, where the trio watches in awe.

Although they are members of the same team, Evelyn, Wild Dog and Curtis have trouble getting along, mostly due to Wild Dog's impulsiveness. However, they group together to stop Oliver from breaking out his friend John Diggle from military prison. They confront Oliver but are easily defeated by him.

While Oliver is saving Diggle, Felicity sends the beaten group, joined by the newest team member Ragman, to take down Tobias Church. However, while they attempt to do so Curtis is injured. Evelyn and Ragman manage to drag him to their getaway car but Wild Dog is captured by Church. The team later saves Wild Dog from Church and destroy Church's criminal empire.

After the serial killer Prometheus emerges in Star City, Oliver reveals to his team that he was the former vigilante 'The Hood', who murdered criminals instead of arresting them. Evelyn is outraged and feels betrayed, given that Oliver hypocritically stopped her from murdering Ruvé. Despite not leaving the team, the revelation created a deep distrust for Oliver in Evelyn.

Deducing how Prometheus chooses his targets, Oliver sends each of his recruits to guard a possible target. The one Evelyn guards inside a moving train is later attacked by Prometheus. Evelyn attacks Prometheus but is defeated and is only saved when Oliver appears. Prometheus flees the train but leaves a bomb behind. Oliver arrives in time to get both Evelyn and the target out of the train before the bomb explodes.

However, Evelyn is later seen meeting with Prometheus on a rooftop, claiming that 'they don't suspect a thing". Evelyn is indeed revealed to be a traitor to Team Arrow. When the team confronts Prometheus, Evelyn disarms Wild Dog and allows Prometheus to flee. Evelyn escapes with him in the smoke created by a smoke grenade.

When Prometheus kidnapped Oliver and tortured him from March 15–22, he set about breaking Oliver psychologically. One of the methods was by "revealing" that he had been keeping Evelyn in the same prison as Oliver. Then he pretended to snap her neck, attempting to show Oliver once again that everyone around him is in danger. Evelyn stood up and revealed to Oliver that she and Prometheus were pretending in order to make Oliver confess the reason why he is a killer to which she reassured her hatred for Oliver and left him in the prison.

Together with Black Siren, Evelyn kidnaps Quentin Lance and Thea Queen from a safehouse. The two lock both up in a truck and drive them to an unspecified location. The team is delivered to Lian Yu, where Prometheus, Evelyn and the rest of their team wait for Oliver's arrival.

Together with Talia, Evelyn is left to guard the cages Thea, Felicity, Curtis and the mother of Oliver's son are imprisoned in. The two climb up into a tree and when Oliver arrives with his allies Slade Wilson and Digger Harkness, they ambush them. As none of the three have their weapons drawn, Evelyn and Talia are at an advantage and force Oliver to drop his bow. Furthermore, Harkness is revealed to be an ally of Prometheus as well. Evelyn and Talia then state that they purposely did not attempt to convince Slade to join them, but also give him the opportunity to join them now. Slade seemingly accepts, only to attack Harkness the moment the three villains focus on Oliver. Using the opportunity, Oliver then attacked Evelyn and throws her to the ground. Talia and Harkness flee but leave Evelyn behind whom Slade then puts into one of the cages. He tells Evelyn that she has been left behind and that she should choose her friends more carefully next time. Oliver then interrogates Evelyn to tell him where Chase is and why he has split up the hostages. Evelyn, however, does not tell him and implies that maybe leaving her behind was part of the plan, stating that so far Chase has outsmarted Oliver at every turn. As the team prepares to leave, Oliver tells him that he will come back for Evelyn once all this is over. Evelyn replies that when this is over, Oliver will be dead.

During Adrian's final move, the entirety of Lian Yu is blown up, leaving Evelyn's fate unknown. Even a year after mostly everyone has returned from the island, Evelyn's fate still has not been addressed. 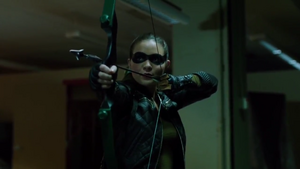