Evelyn Stockard-Price is the wife of millionaire Steven Price and an antagonist in House on Haunted Hill. She had a birthday party at the "House on Haunted Hill", where she was killed and she was the direct descendant of Ruth Anne Stockard, one of the orderlies that worked for profilic killer Dr. Vannacutt.

She was portrayed by Famke Janssen.

Evelyn was apparently a country girl, before she met and married amusement park mogul Steven Price. Evelyn's status as the millionaire's wife turned her into a spoiled, callous and selfish woman who tried numerous times to kill Steven for his money, but failed all times. Her frequent attempts to kill Price became part of Steven and Evelyn's life.

Evelyn and Steven's marriage was also very fragile, and Evelyn even had an affair with Donald W. Blackburn. When she hears about it on TV on her birthday, Evelyn decides to have her birthday party at the Vannacutt Psychiatric Institute for the Criminally Insane the next night. She gives Steven a two-page-long guest list and secretly invites Blackburn as part of her plot to kill Price by scaring the guests into killing him.

When Evelyn arrives at the partially rebuilt Institute that night, she finds that none of the guests (except for Blackburn) are the ones she invited. Shortly after Steven, Evelyn and the guests arrive, the facility mysteriously goes into lockdown, sealing her, Price and the guests inside for the next twelve hours. They then finds several handguns for protection; and when they can't tell whether they are loaded with blanks or real bullets, Evelyn contemplates shooting Steven to find out. She ultimately decides against it and goes to her room.There, Steven accuses Evelyn of starting the lockdown and changing his guest list, which Evelyn denies.

While Steven and guests Sara, Eddie and Pritchett go down into the old asylum in search for a master control for the lockdown, Evelyn stays upstairs drinking in the facility's lobby's bar. When Melissa goes missing while exploring the old asylum, Evelyn comes close to shooting Steven again.When Price and the guests then go off looking for Melissa or a way to escape the building, Evelyn secretly goes down into the basement and uses the asylum's electrotherapy machine on herself. She survives the shock via atropine Blackburn gave her, but is left unconscious, and believed by Sara, Eddie and Price to be dead, until Blackburn revives her. After Evelyn is revived, Blackburn informs her that he has used the asylum's Saturation Chamber to half-craze Price, and that one of the guests are sure to shoot him soon.

When Evelyn then discovers that Melissa is still missing, she decides that they need a real corpse to turn the guests on Price, and so to do this she stabs Blackburn to death with a scalpel in cold blood. She then moves an unconscious Steven from the Saturation Chamber and puts Blackburn's decapitated corpse inside. After Sara finds Price and shoots and seemingly kills him, once the remaining guests go back up into the house, Evelyn comes out of hiding and walks up to her husband's body.

Evelyn calls her late husband a "poor, clueless old geek" and states that she only loved him for his money. This prompts the actually-alive Price to attack and beat Evelyn, threatening to murder her. However, while Steven is beating and throwing Evelyn around, he ends up throwing her through a decaying door in an old, rotted room. The disturbance awakens the Darkness in the house, which begins to form in front of Evelyn. Evelyn tries to make a run for the door, prompting The Darkness to grab her and drag her into itself, rotting her body away and absorbing her soul.Moments later, when The Darkness confronts Price, Evelyn's assimilated soul explains to her husband that everyone who's died in the house is in the Darkness with her, and that it's Price's turn to join them. Later, when The Darkness is about to assimilate Eddie in the building's attic, Evelyn's assimilated soul tells him that nobody ever escapes the house alive.

After she was absorbed and killed by The Darkness, Evelyn's soul was trapped in the facility with the other ghosts. She is shown being tortured alongside Steven by the dead asylum patients, in an identical fashion to one of Dr. Vannacutt's nurses during the 1931 revolt. However, when Ariel Wolfe removed the Baphomet Idol from the building in Return to House on Haunted Hill, Evelyn's ghost was presumably freed from the house, though she was likely sent to Hell for her crimes. 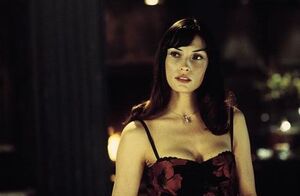 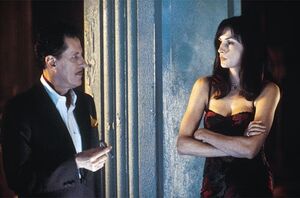 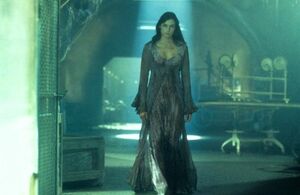 Add a photo to this gallery
Retrieved from "https://villains.fandom.com/wiki/Evelyn_Stockard-Price?oldid=2904560"
Community content is available under CC-BY-SA unless otherwise noted.