Seduce her victims to feed on their agony.

Evelynn, also known as the Agony's Embrace, is a villainous playable character in the multiplayer online battle arena game League of Legends.

A demonic being that has taken form since the Rune Wars, Evelynn is a deadly seductress who assumes the guise of a human female. Feeding off their lust and pain, Evelynn is always looking for her next victim.

She is voiced by Mara Junot, who also voiced Sindel in Mortal Kombat 11.

Eons old, Evelynn began her existence as a savage wisp of shadow, feeling nothing. It was only with The Rune Wars and its resulting mass suffering that fed the beast and its power, feasting on the torment of others and transforming her into a demonic figure.

After the war's closure and the lack of agony to consume, Evelynn grew worried of returning to nothing, and so began to grow her hunt. Difficult at first, her talents grew with hunting down her prey. To feed on the humans of the land, she needed a physical form, rejecting older ideas for a terrifying fiend and instead went with a seductive form to lure one in before torturing them to death to feed upon their misery. However, this bursts are only snacks for her being, and desires time where the world would devolve into chaos once more by her hand, and feasting again on the suffering souls of many.

In game, Evelynn is a assassin type character, hunting those down in the shadows in her shadowy form when passive using Demon Shade. Evelynn can also fire one or a wave of magical spikes with Hate Spike, cursing a target in the expunged state with Allure before either attacking them to regain mana or causing them to be charmed, become faster and strike foes with ethereal whips with Whiplash, and reveal her true form before taking a large boost of magic damage before teleporting away with Last Caress.

Under the facade of a human, Evelynn is playful and flirtatious, often seducing her victims with ease before killing them. She executes this deception with deadly efficiency and doesn't seem to have any remorse for her actions, simply smiling at the young Vayne immediately after murdering her parents. Like most demons, Evelynn takes pleasure in preying upon others, and the more people she can kill, the more satisfied she will be, showing her to be very selfish and unconcerned for human life. 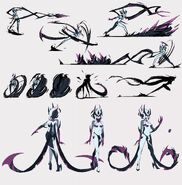 A portrait of Evelynn.

Evelynn in "The Tallest Daisy". 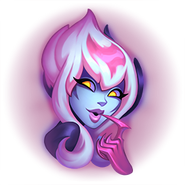