Director of the CDC

Focusing on his career.

Do what it takes to survive the outbreak. (failed)

Dr. Everett Barnes is a supporting antagonist in FX's horror-thriller, The Strain as well as the books it is based on. He is the Director of the Centers For Disease Control And Prevention, and the superior of Dr. Ephraim Goodweather. He is a minor antagonist in Season 1 and 2 of The Strain.

He was portrayed by Daniel Kash.

He first appears in episode 1, during the flight 733 crisis. From the outset of the crisis begun by the landing of flight 733 it is clear that Barnes's priorities are preventing public disorder and upholding the image of the CDC, rather than the truth. Later in episode 5, he sends the FBI after Dr. Ephraim Goodweather, after camera footage of Goodweather dragging the corpse of a Strigoi surfaces, making Him a fugitive.

During the season finale, he is present when Eldritch Palmer and Thomas Eichorst arrive to convince Secretary of New York State Department of Health and Human Services, Margaret Pierson not to quarantine New York. Palmer tricks her into speaking with on the balcony. Barnes witnesses Palmer, throwing her off the balcony, making it look like a suicide, and out of fear of the same fate reaching him, agrees to have Goodweather hunted down, and cooperate with the two.

Barnes is still a thrall of Palmer and Eichhorst and he happens to be on the train to Washington when Ephraim Goodweather posing as Jonathan Crowley another CDC official with medical expertise runs into him. They exchange few words. Barnes states his appreciation for Goodweather and submits to Goodweather's threat to let him pass to Washington without notifying the police which would end Goodweather's work since he is framed for several felonies and thus a fugitive. Goodweather does not trust Barnes however and strikes him down as soon as he turns his back towards him.

Barnes manages to fight back before being struck down again. This prompts Goodweather to consider jumping off the train, but the train travels too fast. He manages to get up again and faces Goodweather one last time. He confirms his submission by stating that "we" humans have been on the wrong side which reveals he does not really believe in humans having any chance to survive and thus he has no qualms about continuing caring only about himself.

Barnes and Goodweather fight once more, Which results in Barnes getting thrown off the Train, the velocity of the train killing him. 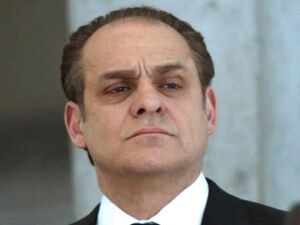 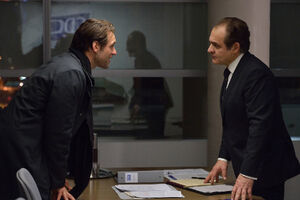 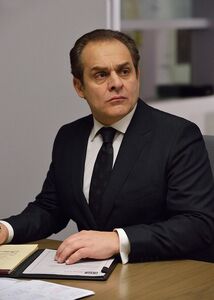 Barnes in a meeting.