Force Japan into progression via a nuclear attack (failed; abandoned).

Everwraith is an antagonist in Marvel Comics. He is a noncoporeal being made up of the souls of those who died in the Hiroshima and Nagasaki bombings and a recurring enemy of the Japanese superhero team Big Hero 6.

When America dropped atomic bombs on Hiroshima and Nagasaki at the end of World War II many of the souls released from those who died, instead of departing for the realms of death, lingered in the corporeal world and assembled together, thus forming Everwraith. Initially, Everwraith sought revenge on the United States for the bombings, but he soon gave up his pursuit of vengeance decades later when he came to realize that Japan was excelling financially and technologically, which he believed to be because of the atomic attacks.

In the modern era, Everwraith began to fade away as the Japanese started to forget the anger that formed him. Still wanting to leave his people a present, he decided that Japan would only grow further if faced with another nuclear attack, and plotted to bring one about. He later saw his opportunity when an electromagnetic pulse released by Magneto caused the hero Sunfire's atomic-based powers to go out of control. To put his plan into fruition, Everwraith kidnapped the mother of young genius Hiro Takachiho and forced him and his robotic bodyguard Baymax to work for him. Hiro and Baymax were soon forced into attempting to kidnap Sunfire from the Giri Corporation, while, at the same time, Everwraith explained his plans and origins to Ms. Takachiho.

Big Hero 6 soon confronted Everwraith in Tokyo, where Silver Samurai managed to cut him to pieces, yet he merely reformed himself and went through the hero, knocking him down. Sunfire then arrived and surrounded the heroes in a wall of flames, where Everwraith explained his origins and intentions to them. He then revealed that several billboards around them were really solar panels powered by Sunfire's atomic flames, and that they would soon cause a nuclear explosion that would engulf Tokyo and therefore have Japan accelerating once again. In order to stop Everwraith, Honey Lemon covered him with nectoplasm, making him tangible, and subsequently distracted him with Silver Samurai while Baymax rescued Ms. Takachiho and GoGo attempted to destroy the panels. Unfortunately, the panels proved to be indestructible, however, Hiro informed Sunfire that Department H had put a bio-kinetic charge in him, which he uses to destroy the panels and Everwraith.

Through unknown means, Everwraith later reformed and was eventually hired by Spider-Man's enemy Doctor Octopus to protect his missile launch site in Japan, which was hidden under a skyscraper. Big Hero 6 soon intervened and started to fight Everwraith, which concluded when Honey Lemon used a converter stolen from Mr. Fantastic to disable the force-field around the skyscraper and turn Everwraith tangible for a few seconds, granting GoGo the opportunity to knock him out. Although the missile ends up launching anyways, Baymax stopped it mid-fight. 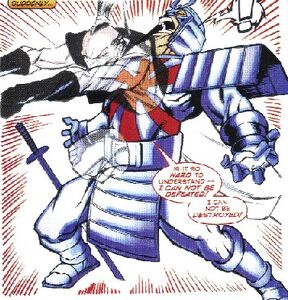