Villains Wiki
Register
Don't have an account?
Sign In
Advertisement
in: Partners in Crime, Supervillains, Criminals,
and 18 more

Each member possesses their own unique superhuman powers and attributes

Take over Bikini Bottom and the world (failed).

Redeemed Supervillains
Every Villain Is Lemons (otherwise known as E.V.I.L.) is a short-lived gang of evildoers, consisting of Man Ray, the Dirty Bubble and Barnacle Man that serve the main antagonistic faction in the SpongeBob SquarePants episode "Mermaid Man and Barnacle Boy V".

Rise and Downfall of E.V.I.L.

E.V.I.L. was created after Barnacle Boy breaks his friendship with Mermaid Man for treating him like a child at the Krusty Krab and joins Man Ray and the Dirty Bubble to form the villainous group and becomes Barnacle Man. Since Mermaid Man can't defeat all three of them on his own, he enlists the help of SpongeBob, Patrick, Squidward and Sandy in order to reform the International Justice League of Super Acquaintances (a parody of the Justice League of America). While at Mermaid Man's headquarters they learn from the chief that E.V.I.L. is causing trouble at a teenage gathering spot called Make out Reef and then move out towards that location (they were going to order pizza originally but was discarded due to the threat at hand). They confront and fight E.V.I.L. and despite the numerous advantages, the incompetent Super Acquaintances defeat themselves. SpongeBob was defeated by Squidward and defeats Patrick. Mermaid Man mistakes Squidward for SpongeBob and washes him up (water is the weakness of fire). Sandy defeats herself by not noticing the boat behind her coming to hit her off the cliff.

Having "defeated" the heroes, Barnacle Man demands three things of Mermaid Man: That he be treated as a superhero, and not a sidekick; that he is called "Barnacle Man"; and that he will finish an adult-sized Krabby Patty. He then immediately rejoins the side of good and goes back to being Barnacle Boy, though when the heroes return to the Krusty Krab, Barnacle Boy admits that he cannot eat an entire Krabby Patty. Everyone laughs throughout the ending (the gang, Man Ray and the Dirty Bubble who are in jail, the guy who kissed his pillow, and the chief).

Likely because Barnacle Boy reunited with Mermaid Man, and Man Ray and the Dirty Bubble ended up in prison, E.V.I.L. has never been seen again.

Every Villain Is Lemons Members 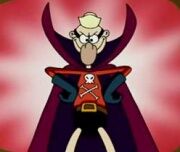 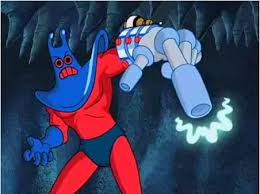 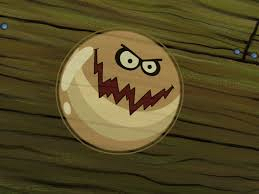 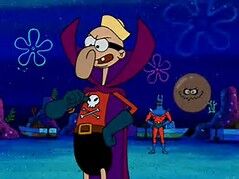 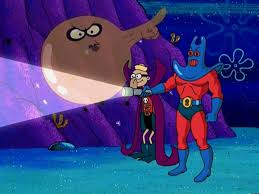 Every villain is lemons 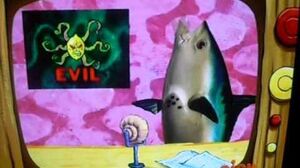 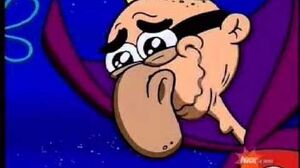 50 b Mermaid Man and Barnacle Boy V Need a hand