Leader of his own band of acorns and rebellious creatures

Kidnap Berri, steal the presents and rule all worlds.

The Evil Acorn is the main antagonist in Conker's Pocket Tales for the Game Boy Color, whom appears to be an acorn who has busted Conker's surprise party and has kidnapped Berri and stole all of his presents and invitations.

The Evil Acorn then headed off towards Krow Keep, and after Conker made his way through the castle, the Evil Acorn pitted Conker against Waldorf. After Waldorf's defeat, the Evil Acorn runs to the Mako Islands and the Claw Swamp.

In the end of the game, the Evil Acorn is blown away sky high into space orbit, vowing revenge as Conker and Berri return home to enjoy the night. The Evil Acorn last appears in the end credits. 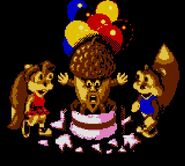 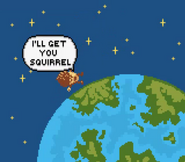 Evil Acorn defeated in the ending of the game. 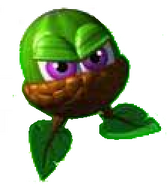 A member of Evil Acorn's army, named Bad Acorns.
Add a photo to this gallery

Retrieved from "https://villains.fandom.com/wiki/Evil_Acorn?oldid=3690018"
Community content is available under CC-BY-SA unless otherwise noted.