Ruler Of the Deadite army

Replace Ash Williams and aid the Deadites to turn all humanity into the undead - basically cause trouble for whomever he meets.

Evil Ash is a major antagonist in the Evil Dead franchise.

He is none other than Ash Williams himself, or — to be more accurate — the dark half of Ash's personality given corporeal form by the Kandarian Demon.

He serves as a minor antagonist in Evil Dead 2 and Ash Vs. Evil Dead, and the main antagonist of the third film Army of Darkness and the 2000 survival horror game Evil Dead: Hail to the King. He will also appear in the upcoming asymmetric multiplayer game Evil Dead: The Game.

He was portrayed by Bruce Campbell, who also portrayed the original Ash Williams, as well as King Edmund in the TV series Tangled.

Evil Ash began his "life" as an entity known as Bad Ash, who appeared out of a mirror during the events of Evil Dead II and proceeded to torment his heroic counterpart - trying to drive him mad - indeed the whole Bad Ash scenario was suggestive of Ash beginning to lose his sanity and could arguably be seen as Ash battling his inner-demons on a literal level.

When both Ash and Kandarian Demon are sent back into the past, the demonic spirit chases Ash into a windmill where Ash breaks a mirror, splitting his reflection into the Tiny Ashes that brought to life as the extension of the Demon itself. When one jumps down Ash's throat, they become Bad Ash, which splits off the original Ash, leading to a hilarious but anti-climatic confrontation where Ash kills his evil counterpart by dismemberment and buries him, in which when buried alive, Bad Ash, now also entity whom being part of Kandarian Demon, become more serious, but is helpless due to dismemberment.

Shortly after, Ash misspeaks the words of the Necronomicon Ex-Mortis which the the Kandarian Demon is the active spirit of, raising Bad Ash as the more powerful Evil Ash, this incarnation was completely immortal and made himself the leader of the Deadite armies in direct opposition to his heroic counterpart - who was reluctantly acting as a hero to a medieval army of his own (due to time-travel related mishaps).

Evil Ash fought with Good Ash over the course of the movie and became more hideous as varied violent acts (which would be fatal to most) simply disfigured his already rotting body further - despite the damage he took over the course of the film he was driven by a crazed zeal to retrieve the Necromonicon, the Deadite's ultimate source of power, from the human settlement Ash was defending.

Evil Ash stormed the settlement with his titular "army of darkness" and a war broke out, with regular Ash's help the tide was turned in humanity's favor - however Evil Ash proved more formidable and via brute strength and sword made his way towards the Necromonicon but the original Ash sets him ablaze, yet even this is not enough and a now skeletonized Evil Ash battles his heroic counterpart again: in an ironic twist regular Ash cuts off Evil Ash's right hand before tossing him onto a lit bag of gunpowder resting on a catapult, regular Ash cuts the cord and sends Evil Ash catapulting to an explosive demise.

Evil Dead: Hail to the King

8 years after Army of Darkness, Ash is plagued by horrible nightmares about the Necronomicon and the Deadites returning. His new girlfriend Jenny proposes returning to the place where it all started: Professor Knowby's old cabin. Unfortunately, shortly after arriving Ash's severed hand appears and plays the cassette containing the Necronomicon's incantation. Ash is unable to stop it in time and the evil is once again unleashed, kidnapping Jenny. As Ash arms himself with an old axe, Bad Ash emerges from a nearby mirror and knocks him unconscious.

Later learning of a priest named Father Allard who, according to Professor Knowby's notes, helped with deciphering the Necronomicon, Ash consults the priest at his church and they come up with a plan to save Jenny and banish the Deadites back to where they came from. After collecting five of the scattered pages from the Necronomicon and the Kandarian Dagger from Annie Knowby's body, who was buried under the cabin and turned into a Deadite, Ash once again meets up with Father Allard. The two men find Jenny and Father Allard begins to open a portal to exorcise the demons possessing her. However, once the portal is fully opened the priest reveals himself to be Bad Ash, taking Jenny with him into the portal with Ash jumping in after them.

Ash eventually catches up with them just before Bad Ash can complete a ritual to sacrifice her to the Dark Ones. Exchanging some banter, the two of them battle for the fate of the world. Severely wounding Bad Ash, he painfully transforms into a massive demonic creature with multiple mouths and arms, closely resembling a stone mural depicting the Kandarian Demon that Ash found in a castle he traversed earlier. Ash manages to buy himself enough time to invoke an incantation that banishes Bad Ash into another portal, unable to resist its pull thanks to the wounds he sustained in battle.

A new incarnation of Evil Ash make an appearance in the episode Ashes to Ashes of Ash Vs. Evil Dead TV Series that is set in the same universe as the film. Unlike the previous incarnation whom appeared in Army of Darkness and Evil Dead II, this Evil Ash is a the lesser variant that grew from Ash's original severed hand that corrupted into a Deadite arm.

Ash and Amanda reach the cabin and Ash leaves to search the workshed. Evil Ash appears, having regenerated from Ash's severed hand, and attempts to convince Amanda to run away with him. She is almost convinced until she sees his decayed hand, after which she makes a few insulting comments toward him, causing Evil Ash to lose his temper and attack her. The two fight and Amanda chops off the decaying hand. He mortally wounds Amanda by hacking a cleaver into her shoulder, falling over and getting impaled by antlers on a stag head. Ash finds her dying as Kelly and Pablo discover the cabin. Ash explains the situation about the "other me" to them, finds Evil Ash and fights him.

It came up to Pablo and Kelly to determine which was the real Ash. As the both of them tried to claim to be the good one, using minor racist remarks and details of his partners that only the real Ash would know. Kelly and Pablo finally shot Evil Ash, after Ash said to shoot them both (and the real Ash likes Asians). Afterwards Ash would once again has to dismember the remains of his dead evil twin.

However true to his immortal nature Evil Ash returns in Evil Dead: Hail To The King - for some reason in this setting he has developed shape-shifting abilities and the ability to launch fireballs: he is also a recurring antagonist in the Evil Dead comics, as the dark half of Ash made flesh (much like the movie) - in the comics he is utterly obsessed with killing his "pure" half.

Beside his ruthless and conquering personality, Evil Ash inherited much of his traits from Ash, yelling when enter in the castle like when Ash do it and uses funny mimics when seducing Sheila or when fighting the knights.

Lesser Evil Ash's personality is more or less same as his Army of Darkness incarnation, but is more manipulative as he is able to seduce Amanda before killing her and would do the same with the others. However, said manipulation was the only trump card that he had due to lacking any powers of his own.

Being also an extension of Kandarian Demon itself, Evil Ash has following powers:

Evil Ash whom featured in the Ash Vs Evil Dead episode "Ashes to Ashes is the lesser variant of Evil Ash who grew from Ash's corrupted severed hand is can be considered as the lesser, inferior variant of the one whom original Ash faced in events of Army of Darkness, as this particular Evil Ash lacks all power of the previous incarnation's powers and is immediately killed off. But is still a dangerous opponent as this Evil Ash was also manipulative, though not competent enough from saving himself from Pablo and Kelly. 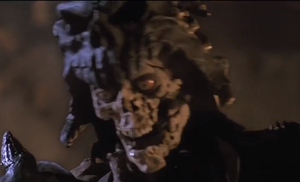 Evil Ash as a Skeleton. 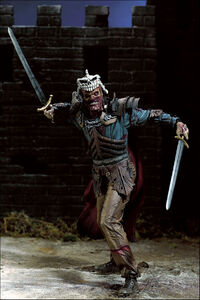 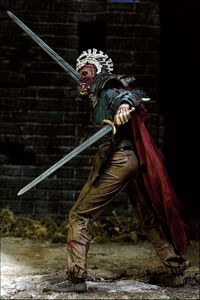 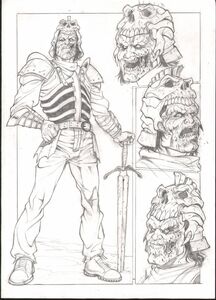 Concept art of Evil Ash in Army of Darkness.