Kill Bill and Ted and destroy everything that is good to them.

Evil Bill and Ted are the main robot henchmen of Chuck De Nomolos, and therefore, they are the secondary antagonists in the 1991 comedy sequel movie Bill & Ted's Bogus Journey.

Like their human counterparts, they are portrayed by Alex Winter and Keanu Reeves.

The film starts off in the utopian future created by Bill and Ted's music, which De Nomolos hates. Rufus was teaching a history class when De Nomolos' army interrupted. De Nomolos tells Rufus that he plans to go back in time and change everything with his secret weapons, which at first appear to be Bill and Ted to the class's surprise until they reveal themselves to be robots. They are programmed with the same personality as the original Bill and Ted, except they are outright evil. Their mission is to kill Bill and Ted, take over and ruin their lives, then give the speech they were going to give at the San Dimas Battle of the Bands but totally different. They used the phone booth to go back in time. Rufus tried to stop them with a grappling hook shaped like a guitar, but seemingly wound up lost in the circuits of time.

As soon as they arrive in the present, Evil Bill used the phone booth and called Bill mimicking his girlfriend Joanna's voice. He made them believe that their girlfriends were breaking up with them for being losers. Then they sent the phone booth back to the future.

They arrived in Bill and Ted's respective fiancées, Joanna and Elizabeth's apartment, where they acted like jerks to them. They wanted them to put out with them, making them break off their engagement. While Bill and Ted traveled through the afterlife, gone through Hell, beat Death through a series of games and had him become their willing servant, and went to Heaven where they met an alien scientist named Station that had the ability to split into twins, Evil Bill and Ted trashed their apartment. When the Battle of the Bands was coming closer, they found Joanna and Elizabeth at Missy's (Ted's stepmom) place. Missy tried to stop them from taking Joanna and Elizabeth but was knocked out by Evil Ted's bad breath. Both Evil Bill and Ted revealed to the girls that they were robots, causing them both to faint.

Meanwhile, the original Bill and Ted came back to life along with Death and Station joining them and had a plan to fight the evil robots by making good robots to fight them. With Death and Station helping them, they gathered some supplies to help Station build the robots. Station merged from twins to a big alien so he can build the good robots. The robots came to life to "fight evil usses and save the babes". 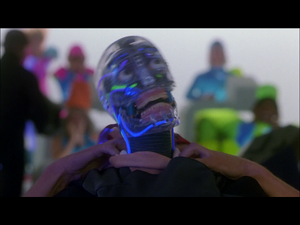 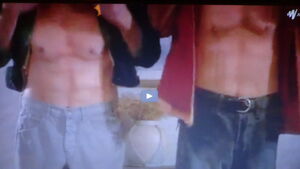 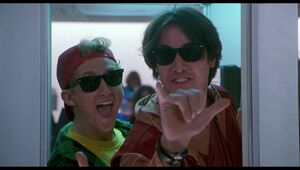 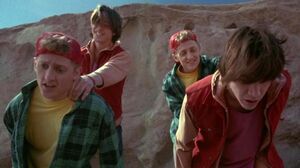 Evil Bill & Ted about to throw Bill and Ted off the cliff.