Bite the most powerful being and destroy the world

Animalistic Brainwasher
The Evil Bug is a small bug that was created from Timmy's wish to get rid of Vicky the Babysitter's evil personality.

Its appearance is a black beetle with red eyes, large pincers and a white skull on its abdomen. Using its pinches, it can attach itself to the buttocks of any person it chooses, causing them to become evil. If the bug is removed from the current host it is in, it will search for a new host.

After Timmy wished for Vicky to be a nice person, her evil left her body in the form of a bug (possibly a tick or a beetle) that had crawled up her butt. The bug sought out other hosts as it needs to find a new host to reside in. The bug sought out Mr. Turner, Principal Waxelplax, and finally, The President of the United States as hosts, but was stopped when Vicky lept in front of the President and the bug went back up her skirt and onto her butt. 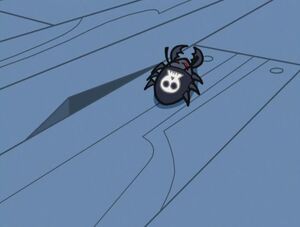 The evil bug coming out from under a floorboard. 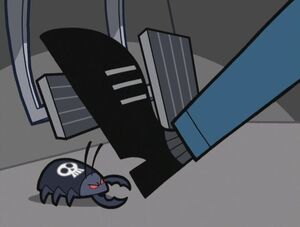