Just like his heroic counterpart in the series, he was voiced by Patrick Warburton.

Evil Buzz comes from an alternate universe where he, instead of Emperor Zurg, has complete control over his galaxy and rules it with an iron fist. He also has his own armies of Hornets that are far more superior in combat and strength than that of Zurg's Hornets.

He first appeared in the episode The Lightyear Factor, when one of Zurg's brain pods accidentally opened a portal to the alternate universe. Traveling to the alternate universe, Zurg is shocked and surprised to see that Evil Buzz rules his galaxy with an iron fist. Zurg then proposes an alliance with Evil Buzz, that they capture the original Buzz and take him to the alternate galaxy, which will let both Zurg and Evil Buzz to have their armies of Hornets to destroy Star Command and take over the original galaxy. However, the original Buzz escapes and helps the alternative Space Rangers in defeating Evil Buzz, resulting him to seemingly perish in an explosion of his ship. With Evil Buzz defeated, the alternative Space Rangers head back to their galaxy, as it is now free from Evil Buzz' reign. However, Evil Buzz is shown to have survived the explosion after taking refuge in a large piece of debris.

Evil Buzz returns in the episode Sunquake, where he has teamed up with Gravitina to get revenge on Buzz for making him lose control of his own galaxy. To that end, they have constructed a heatproof base just above the sun's surface from which to use Gravitina's powers to shoot solar flares at Star Command, Capital Planet and wherever else they feel like. However, the original Buzz and Mira Nova set the station to fall into the sun and Evil Buzz makes a run for his ship, betraying Gravitina along with Buzz and Mira.

However, the floor splits under him and he seemingly falls into the sun. Though it was presumed that Evil Buzz may have perished in the sun, he is revealed to have survived and escaped notice, and he isn't seen again afterwards. 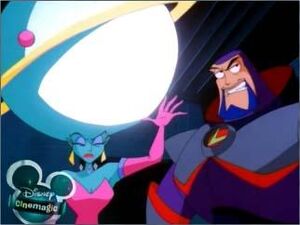 Gravitina with Evil Buzz Lightyear.
Add a photo to this gallery

Retrieved from "https://villains.fandom.com/wiki/Evil_Buzz_Lightyear?oldid=3288981"
Community content is available under CC-BY-SA unless otherwise noted.