Typing on her laptop.

Inventing.
Spending time with her friends.

Aid the Crash Bandicoot and his friends in saving the world (succeeded).

Type depending on Version

Evil Coco is an evil version of Coco Bandicoot who has appeared within different games throughout the Crash Bandicoot series.

In this game, Evil Coco refers to a hypnotized version of Coco who fights Crash on his second boss fight. Coco is kidnapped alongside Crunch Bandicoot and brainwashed by N. Trance to fight against anyone attempting to foil Dr. N. Tropy's plans for world domination. Under the villain's control, Coco retains her normal appearance except she wears a black jumpsuit. Evil Coco battles Crash in a weaponized aircraft that Crash is forced destroy. Afterwards, Coco reverts to her normal self again and helps the heroes proceed through he game.

In Crash Twinsanity, Evil Coco is Coco's 10th dimension self who was removed from the game during development. Not much is known about her except that she isn't that smart, is flirtatous, and may or may not be Evil Crash's sister. Her official appearance was only in one of Crash Twinsanity's deleted scenes, where Crash, Cortex and Nina meet her at the 10th Dimension. She does not attack the Crash team and never acts as an enemy in any sort. Compared to her other dimension counterpart, she has a pink nose, brown fur, different clothes, black hair, fangs, and purple eyes.

She was to be the exact opposite of the original Coco: flirtatious, dumb, and goth-like. That would make Evil Crash the smart sibling, in contrast to the original Crash. Although she was meant to be a villainous counterpart, the only cutscene made with her shows them friendly towards the evil Cortex (who was also supposed to have a 10th dimensional Good Cortex).

Crash of the Titans

Coco is kidnapped by Neo Cortex and is brainwashed to into completing his Doominator machine after Nina Cortex takes command of her uncle's operations.

Coco severs as the first boss of the game after she is transformed into an evil monstrosity by her NV entertainment device. Evil Coco constructs a contraption which fires basketballs towards Crash at high speeds. However, Crash uses a Ratcicle to destroy the machine and manages to remove the NV device off of Coco's head, reverting back to normal.

Evil Coco reappears as a skin for Coco and is based off her design from Crash: Mind Over Mutant. The skin can be unlocked during the Spyro N. Friends Grand Prix by earning Nitro Points. In the Spooky Grand Prix event, A Dark Coco skin can by purchasing from the Pit Stop and it's design appears to be based off the unused version of Evil Coco from Crash Twinsanity. 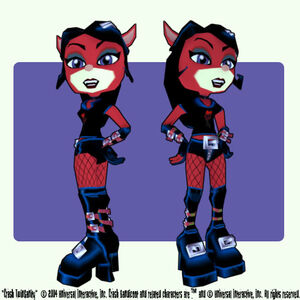 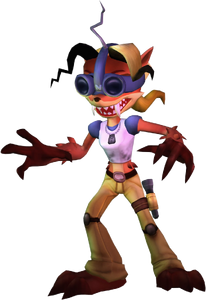 A monstrous Coco Bandicoot from Crash: Mind Over Mutant. 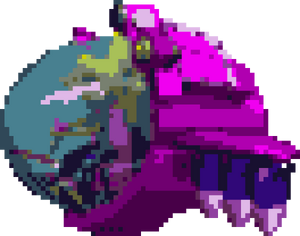 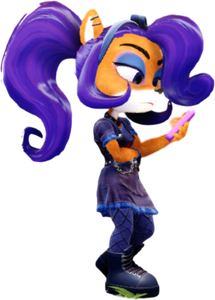 The Dark Coco skin from Crash Team Racing: Nitro-Fueled, seemingly based off the unused Evil Coco design from Crash Twinsanity.
Add a photo to this gallery

Retrieved from "https://villains.fandom.com/wiki/Evil_Coco?oldid=3459218"
Community content is available under CC-BY-SA unless otherwise noted.