To destroy Good Coop and Gorrath's dimension along with them (failed)

After defeating Gorrath and his Glorft army for good, this Coop went mad with still wanting to keep fighting. He became a galactic warlord with conquering planet after planet across space then to other dimensions, to the point that he lost his humane side, got himself into shape and decided to abandon Megas for a better mech. Kiva followed him as she hoped to save her future to only become evil as well. Evil Coop was trying to destroy the last piece of human resistance, which was led by his ex best friend, Alternate Jamie.

Once Evil Kiva informs Evil Coop that not only Good Coop is him but that he is from an Alternate Reality, he was able to to collect Coop's dimension coordinates to which he can destroy Earth all over again. He then uses a Rocket Nuke punch from his mech in an attempt to destroy Coop, Gorrath and Alternate Jamie before heading back to his fortress (which all 3 came out alive but heavily damage Megas).

Coop, Gorrath, and Alternate Jamie planned an surprise assault on Evil Coop's fortress but Megas is destroyed when Evil Coop stabbed Megas' core in it's chest with his mech energy sword.

Alternate Jamie then explains to him how the Coop of their dimension became evil and they then remember that Evil Coop abandoned Megas, so they all go to alternate Coop's house garage where there Coop gets his hands on Alternate Coop's Megas(which turns out to be more updated than Coop's old Megas) along with a plan, and he, along with Gorrath, returns to their own dimension in order to face Evil Coop and his army in combat.

Evil Coop then enters Good Coop's dimension only to be stopped by The Glorft  forces, under Gorrath's orders, and Good Coop to battle him, Evil Kiva and his army. Both armies begin to fight at each other. Gorrath engages Evil Kiva, while Coop faces down Evil Coop.

While it came down to a stalemate between Coop and Evil Coop, Evil Coop's army of robots has been completely annihilated and are outnumbered by the Glorft and Coop. Noticing this, Evil Coop calls on Evil Kiva to withdraw back to their dimension. However they fell right into a trap that Coop set up beforehand, as alternate Jamie was waiting on the other side of the gate for them to come through. When they did, he destroyed a portion of the gate, leaving both him and Evil Kiva trapped between dimensions where they land in the Lurp dimension.

Last we see of Evil Coop is in the credits which he is attacked by Lurp after stepping on it with his mech only to be thrown back by the Lurp.

After defeating the Glorft, he becomes mad and wants to fights more to the point he even fought some of his old allies and enemies (Among them was T-Bot, Magnanimous, R.E.C.R. and even The S-Force) with brutality. He takes great joy destroying anyone or anything that gets in his way. He seemed to be cynical about television programs as he rules out the wrestling moves Coop uses were fake. Unlike his alternate counterpart, he is muscular and intelligent in which he mocks Coop's weight and Megas, calling it a "Toy". However, unlike Coop who never quits from a fight no matter the odds stack against him, Evil Coop seems to now back down from a fight when the odds are stack against him (such when his army was completely destroyed and was outnumber by Coop and the Glorft army). 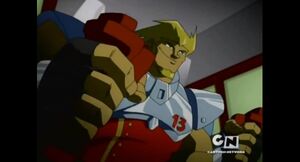 Evil Coop about to stab Megas with his mech's sword 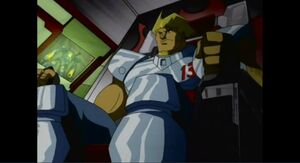 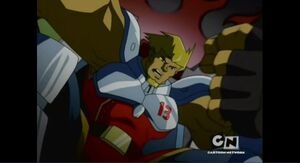 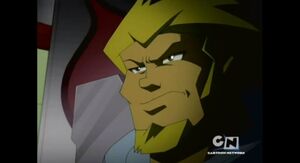 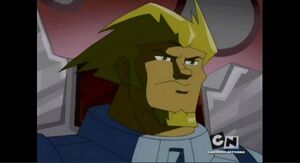 Him realizing that all of his army are completely destroy 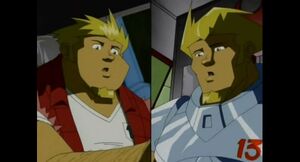 Evil Coop attacked by a Lurp in the credits 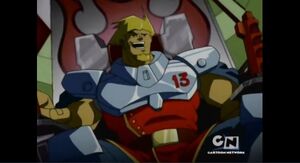 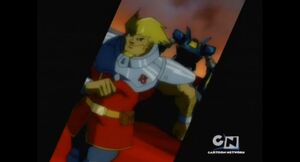 Evil Coop abandoning Megas
Add a photo to this gallery
Retrieved from "https://villains.fandom.com/wiki/Evil_Coop?oldid=3374784"
Community content is available under CC-BY-SA unless otherwise noted.