Find something to eat (succeeded).

Animalistic Doppelganger
Evil Crash, also known as Nega Crash, is a character from the Crash Bandicoot videogame series. He is Crash Bandicoot's evil tenth Dimensional counterpart and his neutral rival. He acts as a major antagonist in the game Crash Twinsanity, the first game he's seen in.

Evil Crash has sharp teeth, long claws, green eyes with red pupils, spines sticking out of his back, and his feet come out of his shoes somewhat. He has a much darker fur color than Crash's, his arms are also much longer, and his hair is less spiky than Crash's.

While Crash uses easy, simple attacks, Evil Crash has erratic and dysfunctional ways of attacking. He is shown to be somewhat immune to objects that would cause harm to Crash, such as Nitros, TNTs, and even enemies. Because of this, He is presumably much stronger than Crash.

Evil Crash's behavior is impulsive and aggressive. He is a carnivore and lives on a steady diet of meat. This might explain why he captured Nina and chased Cortex. Evil Crash hardly looks like his original counterpart, but slightly shares his personality. He may be also the brother of Evil Coco.

He is first seen in the first cutscene of Twinsanity Island where Cortex thinks he's hugging Crash, noting "Your fur is so soft, and warm." Crash and Nina back away, then Cortex looks over at Evil Crash, who then hops over Cortex and kidnaps Nina, leading to the next level where Crash must pursue Evil Crash. After finding Evil Crash with Nina tied in ropes, Cortex bravely says "Let her go, take me instead!" Then ends up in Evil Crash chasing him. After the chase is over, Crash can continue the next level. At the end of the game, he ate the Evil Twins when they fled into his house. He is seen in a background picture in the credits in a huge rollerbrawl with the other characters of the game.

Evil Crash appears as a skin in CTTR, sold in Mystery Island for 2500 coins and going by the name of Nega Crash, which has a much different look from the real Evil Crash. Nega Crash has actual fingerless gloves, has no hair on his back, has a foot hole on one of his shoes, and has spines on his back. He was originally going to appear as a racer.

Evil Crash was going to make a appearance in Crash Boom Bang but for unknown reasons he was cut from game. ﻿However he does make a cameo in one of the minigames.

References to Evil Crash were added to Nitro-Fueled during the Spooky Grand Prix event. His shadow can be see on the "Nina's Nightmare" racetrack and a sticker of Evil Crash's shadow can be unlocked by earning Nitro Points. 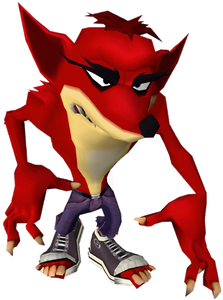 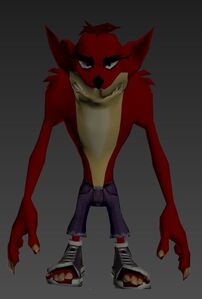 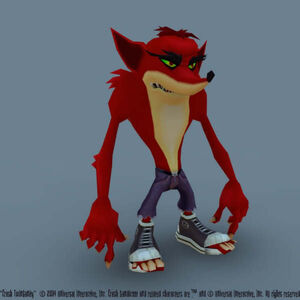 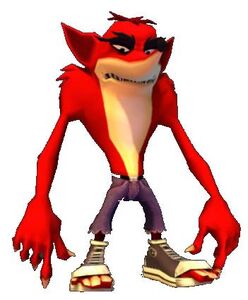 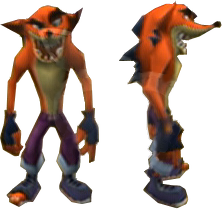 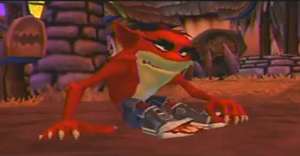 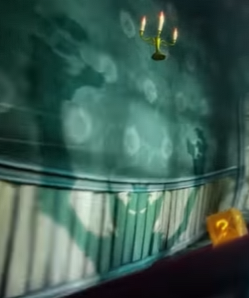 Retrieved from "https://villains.fandom.com/wiki/Evil_Crash?oldid=4342819"
Community content is available under CC-BY-SA unless otherwise noted.