Reveal to Charley that Jerry is a vampire (remake: failed).

He was portrayed by Stephen Geoffreys in the original and Christopher Mintz-Plasse in the remake, who also played Chris D'Amico in the Kick-Ass films.

Before his transformation, Ed was Charley Brewster's best friend, though he was sometimes more of a bully than a friend and often made fun of him. When Charley told him about his suspects about Jerry being a vampire, Ed laughed at him, but also gave him information on how to protect himself from vampires-although he did that because the former paid him to do so.

One night, Ed pranked Charley in front of his girlfriend, Amy, by pretending that he had been bitten by a vampire. The two teenagers argued, then Ed took a shortcut. Ed was then stalked by Jerry, who bit him, wgich transformed Ed into a crazy and violent vampire.

Vampire Ed then tried to kill Peter Vincent, the actor who wanted to help Charley kill Jerry, but Peter protected himself by use of a cross, which left Ed with a wound on his forehead. Later, Ed transformed into a wolf and tried to kill Peter again at Charley's House, but was impaled and apparently killed by him. However, at the end of the film, it was revealed that Ed actually survived.

In the remake, Ed Lee was Charley's former best friend. The two of them were very close due to their shared love of "Geek" stuff. However, when Charley became more popular as a result of dating Amy, he cast off and ended all forms of his former life, including his friendship with Ed. As expected, Ed was extremely bitter and resentful toward him for that. Early in the film, Ed attempted to tell Charley that Jerry was a vampire, but Charley didn't believe him and hurtfully said that his own life didn't start getting good until he stopped being Ed's friend.

Very shortly after that, Evil Ed was transformed into a vampire when Jerry (Whom Ed spied on for a while) cornered him, told him that nobody would believe him, and that he had no friends. Evil Ed, as a full vampire, attacked Charley, Amy, and Peter Vincent in Peter's penthouse apartment later in the film. Ed appeared to enjoy being a member of the undead and excitedly talked about how cool his new abilities were while he stalked Charley and Amy throughout the room. In the end of that scene, Evil Ed was killed by Charley. During the fight, Ed was already heavily wounded in several ways and was barely standing, so Charley put him out of his misery with a stake through the heart. Right before Evil Ed died and his body turned to ash, he softly said: "It's ok, Charley, it's ok," which indicated that he had forgiven Charley for everything. 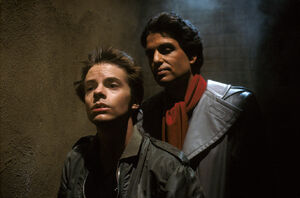 Evil Ed shapeshifting from a wolf back into a vampire. 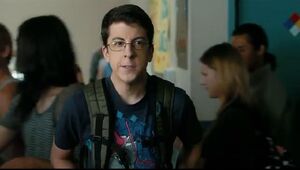 Evil Ed in the remake. 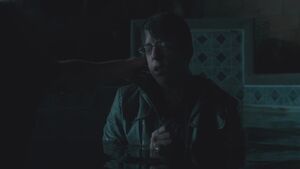 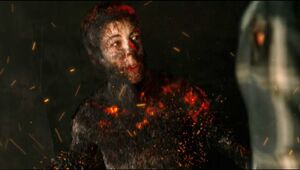