Evil GIR is the deuteragonist in Invader Zim and the secondary antagonist of the Netflix movie Invader Zim: Enter the Florpus.

He is voiced by Rosearik Rikki Simons.

He got test into his new found functionality. Zim commands him to investigate a police siren. But instead of gathering information, GIR attacks the police car and throws it through the wall of Zim's Base with the cop tied up in his own seatbelt. Because the cop sees Zim and GIR out of their disguises, Zim replaces his brain with that of a squid's to erase his memory. During the memory transplant, however, GIR starts to question Zim's intelligence and therefore his authority. When Zim orders GIR to "monitor Earth broadcasts", he does so only reluctantly, and even has to force himself to address Zim as "Sir". Finally tired of Zim's methods, GIR comes to the conclusion that he is not being utilized properly and makes for the nearest Library.

Meanwhile, the cop wakes up with his new brain as Squidman, who is unhappy about being human and badly wishes to return to the sea. As Zim is explaining to Squidman that he's in a hospital and not an alien base, his walkie-talkie goes off, reporting that a "flying metal child is draining the brains of citizens". Zim immediately realizes the police are talking about GIR, and takes Squidman with him to the library. When they get there, GIR is completely out of control, draining the knowledge from humans' brains and blowing his cover. Zim commands GIR to stop, but his former robot slave attacks him. Zim runs through the library, trying to escape GIR, with almost no help from Squidman. Just when it seems GIR is about to finish Zim off, however, Squidman somehow squirts ink into GIR's eyes, and Zim is able to get GIR back to normal while he's distracted. 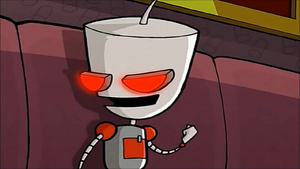 Evil GIR's evil grin.
Add a photo to this gallery

Retrieved from "https://villains.fandom.com/wiki/Evil_GIR?oldid=3833659"
Community content is available under CC-BY-SA unless otherwise noted.