Escape from The Land of Shadows & Trap Julian There (Succeeded)

Evil Julian is a truly evil counterpart to Julian, created by the corruptive influence of the Sorcerer's Chaos Pearl, bringing every part of Julian's darker side to life and giving it dangerous powers. He is one of main antagonists of Season 2 in Randy Cunningham: 9th Grade Ninja.

During Julian's birthday, Jullian had it at a great stage magicians show. However he was miserable at his own failures at learning to illusions, and after Howard told him he could never get worse, Randy went to comfort him, Julian began a long life story. However Randy slipped into the Nomicon while he was talking. During this Julian found and took Randy's bag containing one of the Sorcerer's Chaos pearls believing it to be his birthday present. The orb's evil power began to corrupt him, Randy managed to get it back but not before Julian had gotten a taste of its power. During the show, Julian managed to get the stage magician to involve Randy in a trick allowing him to steal the Pearl. The Pearl then empowered him giving him genuine magical powers, but also corrupted him and drove him insane as the power has bonded with the darker side of his personality.

He attacked the show, driving the stage magician away, before bringing the gargoyles to live and turning the robot on the guest. Using his new power he opened up a doorway to the Shadow Realm, planning to throw his guests in. However, Randy fought back and managed to save them. As the creatures from the realm of shadows tried to pull him in, Randy managed to swipe the Pearl from Julian. Howard managed to retrieve it and offered it to Julian in exchange for freeing Randy. Julian agreed but Howard threw the bag, and grabbing it Randy threw it into he portal. Julian tried to jump into get it back, but Randy managed to pull him out, as well as forcibly separating the corrupted part of him created by pearl in process. Saving the real Julian who awoke unsure what had occurred, while his evil counterpart (the embodiment of his darker side that has bonded with powers of Chaos Pearl) was trapped in the land of Shadows. It was there he learned Howard had tricked him and the bag only had one the gargolyes heads in it.

Evil Julian returns and now starking and terrifying his real counterpart, using mirrors to contact him from the land of Shadows, planning to use him to allow him to enter the real world. Julian bonded to Randy to keep himself safe, but sick of Julian constantly messing up all there fun, Randy agreed with Howard to ditch him in the ice maze, unknowningly leaving him vulnerable. Shadow Julian suceeded in kidnapping his counterpart and used him to switch places, allowing him back into the real world.

In "Winner Takes Ball", It is Revealed The Chaos Pearl's Energy was fused with The Water Everyone in Norrisville drank, Causing them to be brainwashed with Evil Julian's current Chaos Pearl. When Evil Julian encounters with Randy and Howard once more, explaining how the brainwash began. Evil Julian then has a showdown with Randy, when demanded the citizens to attack him, it was also revealed Randy has another Chaos Pearl that also allows to make citizens do his bidding, When they fought over this, Randy ends up being brainwashed by his Chaos Pearl's Power during his Fight with Julian, as They when things got out of hand, Evil Julian manages to steal the other Chaos Pearls, But as Howard drank the Water filled with the Chaos Pearl's Energy, he was Brainwashed as Evil Julian demanded the Brainwashed Howard to fall to hs death at the pithole. as Randy has to make a hard decision of either save his friend or claim the Pearls back from Evil Julian. Randy ends up saving Howard, allowing Evil Julian to make his escape and planning his next act.

In "Ball's Well That Friends Well", Randy has forced himself to make an uneasy alliance with The Sorcerer so they could defeatt him, but after Evil Julian's powers were drained by The Sorcerer, The Sorcerer turned against him, only to be pinned by Howard and the real Julian. Because Evil Julian's original nature was being Julian's darkest side of his personality, both Julian's inevitably attracts to each other like a magnet much to Evil Julian's horror. Ultimately, Evil Julian ceases to exist once he merged with the real Julian, not only reduced into the dark side of Julian's personality that eventually reunites with his psyche, but also reveals how to restore The Sorcerer back to normal. 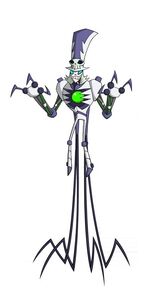 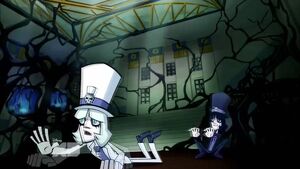 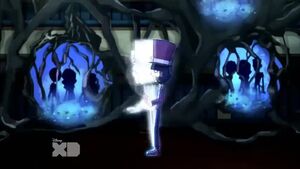 Retrieved from "https://villains.fandom.com/wiki/Evil_Julian?oldid=3594424"
Community content is available under CC-BY-SA unless otherwise noted.