Kill Ariel and her friends (failed).

The Evil Manta (also known as Manta) is a major recurring antagonist in Disney's The Little Mermaid TV series. He is an evil being whom the ancient Merpeople once locked in a volcano, but Ariel accidentally lets him loose.

He was voiced by Tim Curry, who also played Frank-N-Furter in The Rocky Horror Picture Show, the Lord of Darkness in Legend, Wadsworth in Clue, Pennywise in the It television miniseries, Thaddeus E. Klang in TaleSpin, Taurus Bulba in Darkwing Duck, Hexxus in FernGully: The Last Rainforest, Cardinal Richeliu in The Three Musketeers, Farley Claymore in The Shadow, Kilokahn in Super Human Samurai Syber-Squad, Drake in The Pebble and the Penguin, Dr. Anton Sevarius in Gargoyles, Long John Silver in Muppets Treasure Island, Simon Doonan in the Titanic TV movie, Maestro Forte in Beauty and the Beast: The Enchanted Christmas, Slagar the Cruel in Redwall, Dr. Slicer in Recess, Ben Ravencroft in Scooby-Doo and the Witch's Ghost, Big Brother in Johnny Bravo, the Mouse King in Barbie in the Nutcracker, Professor Calamitous in The Adventures of Jimmy Neutron: Boy Genius, Scarlet Fever and Nick O' Teen in Ozzy & Drix, Dale "The Whale" Biederbeck in Monk, Belial in The Legend of Atlantis, El Maléfico in ¡Mucha Luca!: The Return of El Maléfico, Von Talon in Valiant, Anatoly Cherdenko in Command and Conquer: Red Alert 3, Philippe in Barbie and The Three Musketeers, Billy Flynn in Criminal Minds and Emperor Palpatine in Star Wars: The Clone Wars.

In his first appearance, Manta tricked Ariel into freeing him from his volcano prison. He uses his sorcery to spread the shadow of prejudice. He is defeated when the sea creatures all band together and sing in harmony.

In his second appearance, everyone underwater believes that a boot is a weapon called a thingamajigger. It eventually comes into Manta's possession and he uses it to threaten Triton. He is defeated when Ariel shows up with a pair of boots and scares him away.

In his next appearance, Manta buys Triton’s stolen trident from Mory the Eel. Ariel’s friend Urchin retrieves it but gets the Manta chasing after them. Manta kidnaps Flounder as a trade. Urchin shoots the trident, injuring both Manta and Flounder.

In his final appearance, Manta is training his son, Little Evil, to become a villain. Little Evil comes to be friends with Ariel, which infuriates Manta. Manta kidnaps Ariel and attempts to set a brain sponge on her. The sponge eventually turns on him but Ariel and Little Evil save him. He apparently reforms after that, if only a little bit.

Manga is a slender black and purple manta-ray merman who is both muscular and mustachioed. He spreads strife and hatred among the people of Atlantica before Ariel stops him. Although it is unknown how old he is, he is believed to be ageless. He is an evil merman in the form of a giant black and purple manta ray, giving a foul presence to wherever he dwells. Later he tries to take over the seas several times, but is thwarted again and again by Ariel in the 1992 The Little Mermaid series.

For most of the series, Manta lived up to his name, and was regarded as pure evil. He is very cunning, dishonest, and manipulative, even manipulating Ariel to release him from his prison in his debut. He desires power, and has wished for the trident and the Atlantican throne.

Despite his villainous ways, he appears to be a charming, protective, and charismatic father to his son, although he does try to get Little Evil to follow in his footsteps at first. However, this also inadvertently caused him to reform. 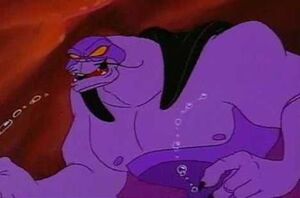 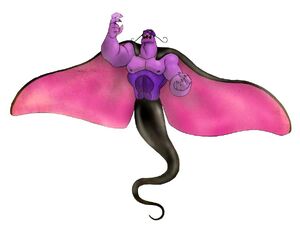