Kill Jacob and Lisa (the players).

Evil Marie is a psychotic undead killer and one of the bosses of CarnEvil.

A combination of Lizzie Borden and Marie Antoinette, the player encounters her at the end of the Haunted House Level in the cemetery, where she explodes out of a mausoleum and attacks with her axe. Marie is extremely tough boss to take out. Although she can take damage anywhere in her body, she does not receive a stun, a rigidity which most foes suffer when they had their weak spots shot by guns in majority of gun games. With this enhanced stamina, she continues to savagely attack players with her axe, and her axe swings inflict a lot of damage.

In another phase of the boss battle Marie is capable of flight, and throw her axes at players. But so long as Marie is not close to players, this part of the battle is easier, for Marie's axe projectiles can be shot down, providing players to focus on Marie better. Halfway through the fight, she loses her dress and continues the battle in her undergarments.

When Marie's vitality is eventually reduced to a quarter, she appears floating at the top of a fountain, empowered by unholy essences emanating from the fountain. Marie then unleashes energy projectiles at players. Energy shots are indestructible and like Marie's axe swing, the said energy attacks inflict painful damages. When played with a partner, Marie shoots two indestructible energy shots, making players' safety in number useless. Players' only hope at this point is that they shoot as fast as they can before Marie has a chance to toss energy waves at them: easier said than done.

When defeated, she loses her balance as she loses her connection to the fountain's evil essence, plunging straight onto the sharp end of fountain peak screaming, and she gets impaled to death. Her blood gushes from her mangled body and flowed down the brook. With that, the Haunted House stage is cleared.

There are indications in the haunted house that Marie was always bloodthirsty even from a young age, the most telling of which is a crayon drawing depicting her decapitating someone. However, since the Haunted House is a ride, it is unknown if that is real. 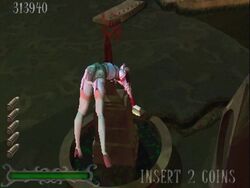 Evil Marie defeated.
Add a photo to this gallery

Retrieved from "https://villains.fandom.com/wiki/Evil_Marie?oldid=3702491"
Community content is available under CC-BY-SA unless otherwise noted.