Destroying everything in their way.

The Evil Minions or Purple Minions are the major antagonists in Illumination's 4th feature film Despicable Me 2. They were Gru's minions after being abducted by El Macho who turn them into purple monsters with the PX-41 serum for his global domination.

They were all voiced by Pierre Coffin and Chris Renaud.

These Minions are the state of extreme mutation caused by the mutagen PX-41 entering their blood vessels. The Evil Minions are for all intents and purposes, made to be indestructible: They are immune to weapons like flamethrowers, guns, axes, and undercover police cars: and are able to withstand the explosion from swallowing a bomb. They will devour and destroy anything that gets in their way including the above mentioned weapons. Evil Minions can also self-heal, and are known to be very dangerous.

El Macho abducts an army of Minions from Gru and then mutate them into hostile destructive monsters by using the PX-41 serum with the help of Dr. Nefario who later quits to be on his side. At dawn, the Evil Minions are about to get in the rockets to terrorize the world until they chase Gru and the two Minions, Dave and Stuart, way up to the tower. When the minions are about to devour them, Dr. Nefario, the girls, and the Minions arrive on a ship and shoot at the purple minions with antidote to turn them back into their regular yellow state. Gru and the gang turn all the minions back to normal before confronting El Macho.

At the wedding, the only one purple minion somehow escaped and appeared when the family were taking group pictures, much to everyone's shock. 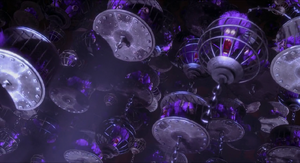 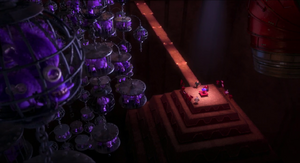 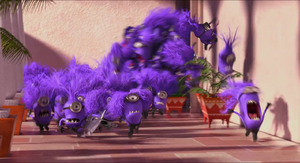 The minions chasing Gru and his two regular minions. 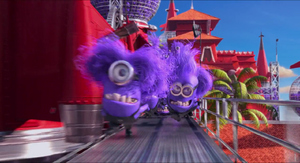 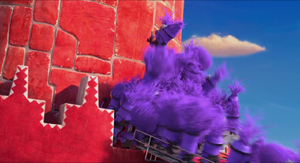 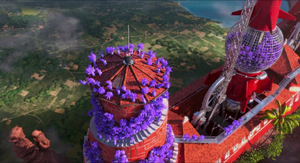 The Minions surround their prey on top of the tower. 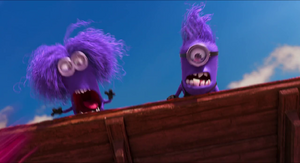 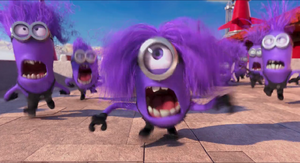 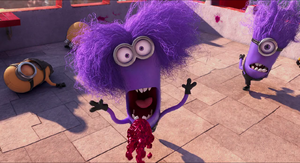 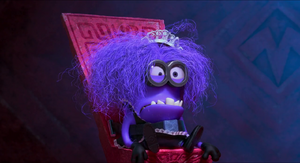 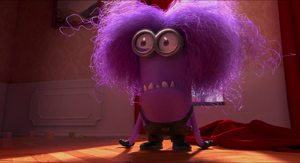 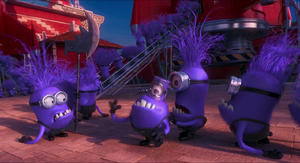 A minion with a jelly jar on his head